It also remains to be seen if Kylian Mbappe plays, with Real Madrid trying to sign him before the end of the transfer window 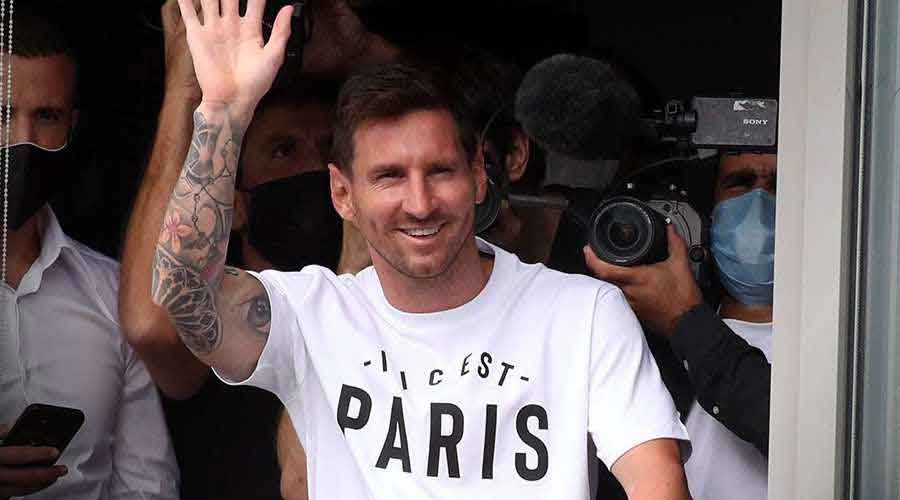 Lionel Messi could make his eagerly awaited debut as Paris Saint-Germain visit the modest surroundings of Reims. The six-time Ballon d'Or winner joined PSG three weeks ago after his new contract with Barcelona fell through.

It also remains to be seen if Kylian Mbappe plays, with Real Madrid trying to sign him before the end of the transfer window. "Mbappe has worked very well as usual, and he trained for the game this morning," PSG coach Mauricio Pochettino said. "The position of our president and our sporting director is very clear on Mbappe's situation at PSG."

Neymar, Messi and Mbappe have all been named in the PSG squad for tonight's game with Reims

With the timing of Messi's eagerly awaited debut for PSG getting nearly all the attention, Nice got on with the business of winning with a 4-0 rout of Bordeaux in the French league. Amine Gouiri continued his fine start to the season with two goals. The forward has three goals and an assist so far for Nice, which is coached by Christophe Galtier. He left Lille after guiding it to the French title last year.

The hosts opened the scoring in the sixth minute through Justin Kluivert, the son of former Netherlands and Barcelona striker Patrick Kluivert. It was his first goal for Nice after joining on loan this season from Italian club Roma. Gouiri then netted twice before the break, the second with a penalty after being fouled by veteran defender Laurent Koscielny.

The fourth was scored late on by midfielder Khephren Thuram, the son of former France defender Lilian Thuram. Nice is unbeaten so far but there were no fans to cheer the team on because of a stadium ban following fan violence in the team's previous league game against Marseille.

Marseille also won, beating another bitter rival in Saint-Etienne 3-1 in a game where visiting fans were not allowed to travel for the game at Stade Velodrome.

New signings Matteo Guendouzi, fellow midfielder Gerson on his debut and winger Cengiz Under all scored for the home side, with defender Timothee Kolodziejczak getting Saint-Etienne's goal.