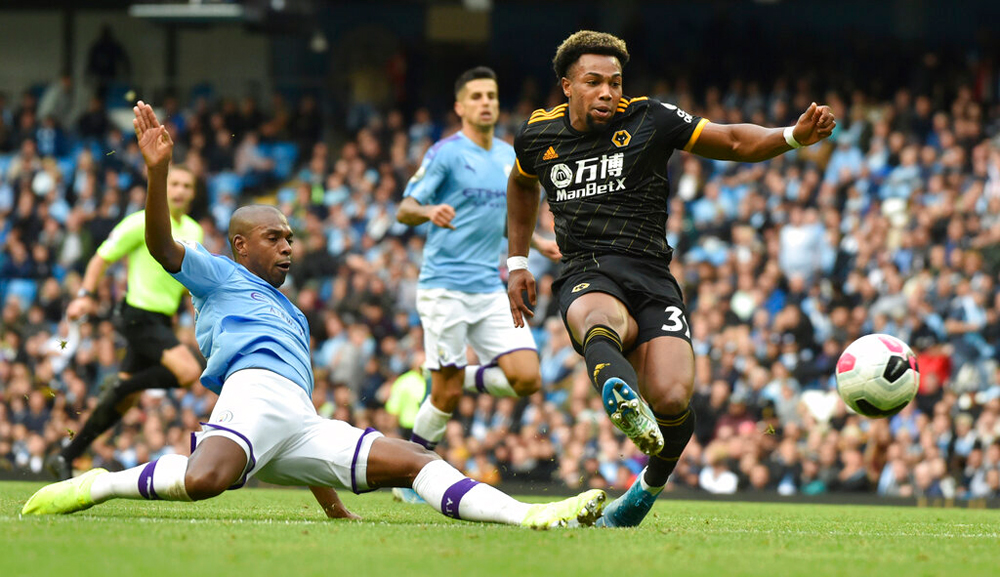 Manchester City suffered a shock 0-2 defeat at home to Wolverhampton Wanderers on Sunday that left them eight points behind Premier League leaders Liverpool.

Two second-half goals from Wolves forward Adama Traore condemned the champions to their first home league defeat since they lost to Crystal Palace on December 22.

It was also City’s second defeat in their last four league games following the 2-3 loss at Norwich City last month and it will strengthen Liverpool’s belief that they can win their first league title in 30 years.

City looked shaky at the back throughout the game with Wolves having three good chances to open the scoring in the first half after waltzing through the makeshift central defensive pairing of Nicolas Otamendi and Fernandinho.

Yet Pep Guardiola’s side also lacked their usual sharpness in attack and the nearest they came to scoring was a 67th-minute free-kick from David Silva, which struck the bar.

The decisive blow came when Raul Jimenez broke from deep in his own half, skipped past Otamendi and found Traore who kept his cool to beat Ederson.Traore then added the second deep in stoppage time, after another counter-attack through the exposed City defence.

In another game, Chelsea striker Tammy Abraham scored his eighth league goal of the season after an excellent first-half performance helped them to a 4-1 win at struggling Southampton.

The result lifted Chelsea to the fifth place on 14 points from eight games.

Abraham fired Chelsea ahead in the 17th minute as he latched on to a clever pass from Callum Hudson-Odoi and looped his shot over advancing ’keeper Angus Gunn, with the ball crossing the line before Maya Yoshida’s desperate clearance.

Mason Mount blasted the ball past Gunn in the 24th minute after taking a fine Willian pass in his stride before Danny Ings pulled one back for the Saints, poking the ball in from close range after Yann Valery’s darting run.

More slack defending from the home side allowed Chelsea to restore their two-goal advantage shortly before half-time, when N’Golo Kante’s fierce shot from outside the penalty area took a deflection off Pierre Hojbjerg.

The pace dropped in the second half as Chelsea packed their midfield before late substitute Michy Batshuayi, who came on for Abraham, put the icing on the cake for the visitors with a clinical 89th-minute finish.

Arsenal, meanwhile, rode David Luiz’s ninth-minute strike to win by a solitary goal against Bournemouth. With this win, Arsenal are now third in the standings, trailing the second-placed City by just one point.