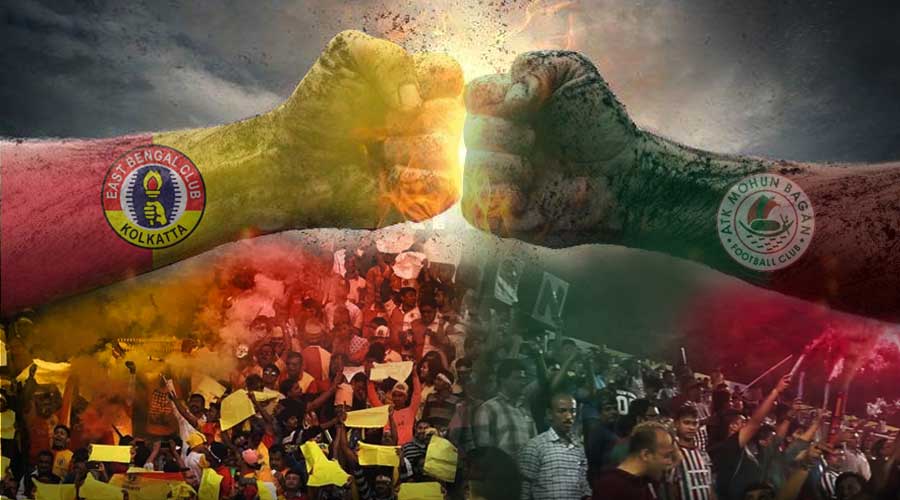 Reams have been written about the ‘ghoti-bangal’ divide that has dominated the mindspace of every football fan whenever these two Kolkata giants have met on the field.
Graphic: The Telegraph Online
Sanjeeb Mukherjea   |   Calcutta   |   Published 18.02.21, 04:36 PM

A century old rivalry in a new avatar. Divided by culture, yet united by the passion for Joga Bonito, the protagonists of India’s biggest football game, ‘boro match’, are ready to start another chapter in their decorated rivalry on Friday. Football’s mud and madness will descend on Indian homes via television and digital screens as ATK Mohun Bagan and SC East Bengal lock horns in the Hero Indian Super League (ISL) at the Fatorda Stadium in Goa on Friday.

Reams have been written about the ‘ghoti-bangal’ divide that has dominated the mindspace of every football fan whenever these two Kolkata giants have met on the field. But it is the sheer weight of history as well as the achievements of the two that has added to the mystique over decades.

14, Balaram Ghosh Street saw the birth of Bagan in August 1889, with a view to promote the game among the youth. And steadily, the club gained prominence as it started showing up on the big stage of Indian football, one that had been dominated by British Army teams.

Prominence turned to reverence when a bare-footed Mohun Bagan led by the venerable Shibdas Bhaduri, beat the much-fancied East Yorkshire Regiment 2-1 to become the first Indian club to win the IFA Shield. A momentous feat on the day that seemingly spurred the passionate thousands present at the game to connect the victory with the wave of nationalism as the country struggled to break free from the clutches of Imperial rule.

A kilometer and a half away from Balaram Ghosh Street, 20 B Nimtola Ghat Street saw a group of Bengali gentlemen come together in 1920 to form East Bengal. The reason – Jorabagan Club has dropped Sailesh Bose and Nota Sen from their squad that was to play Mohun Bagan in the Cooch Behar Cup, which was perceived as an anti-Bangal move.

And the teams finally met for the first time in the semi-final of the Cooch Behar Cup in 1921. Though it wasn’t given official ‘boro’ match or Derby status, the rivalry took off when the two clubs crossed paths in May 1925, with East Bengal winning by a solitary goal. And that’s how the famed duel between the two started getting eminence, and soon became part of football folklore in India.

The urge to win every title in sight, the need to dominate the game, and to top it all, to trump the arch-rival, this became the foundation for the famed battles as East Bengal and Mohun Bagan truly emerged as the biggest clubs in the country. And with fan bases cutting across the country, it couldn’t get any better.

East Bengal versus Mohun Bagan was always a game both wanted to win, and hated to lose. And their vast multitude of faithful fans would give this compelling rivalry an added dimension. The fate of the Derby would often decide who had the bragging rights for the season. And the spectacle of it all was further enhanced by some memorable jousts over the years.

The 1934 Darbhanga Shield semi-final saw the two teams lining up for what would turn out to be a big win for the Mariners. Amiya Deb scored a hat-trick, and ended up scoring 4 goals as Bagan beat off their rivals 4-1 to claim the bragging rights.

And when the Mariners annexed the 1947 IFA Shield final beating East Bengal, much was written about how fate had played a part in Bagan’s ascendance and India’s independence. Legend has it that when the 1911 IFA Shield winning Bagan team was being carried on the shoulders of the crowd after their historic win, someone had asked them about when would India become independent. The reply as old-timers say, went something like, ‘when Mohun Bagan will win the IFA Shield again’. With the likes of Sailen Manna, Dr. T Ao, Mahabir Prasad in their ranks, Bagan would go on to beat East Bengal in the ’47 Shield final 1-0, courtesy a strike by Salim.

The Cooperage in Mumbai saw one of the first dramatic Derbies as the Big Two, as they were referred to, came out to play the semi-final of the Rovers Cup in 1960. While the stands were packed, there was serious Bollywood presence too. The legendary music director S D Burman and his son, Rahul, alonwith actor Ashok Kumar, had come to watch their favourite East Bengal team. Not to be outdone, Bagan had among its supporters, the iconic singers Hemanta Mukhopadhyay and Manna Dey present at the game. Though Bagan struck first, East Bengal hit back with goals from Lakshminarayan and Arun Ghosh to script a memorable 2-1 win.

1961 saw another terrific encounter in the return leg of the Calcutta Football League (CFL) as Tulsidas Balaram skipped his way past a host of Mohun Bagan defenders to score the winner, thus handing East Bengal the title. In 1967, the Derby saw Chuni Goswami smack in the winner for Bagan to pip ther rivals 1-0 in front of a packed house at the Eden Gardens in the Calcutta Football League, a result that enabled Mohammedan Sporting to win the title for only the third time since India’s independence.

While the two clubs virtually dominated Indian football from the fifties, it was the 70s that saw one of the most memorable matches to have ever been played between the two. With East Bengal dominating their rivals, stretching their unbeaten streak to nearly five years against Bagan, the grean and maroon brigade pulled one back, beating the red and gold unit in the 1975 Durand Cup semi-final. But no one, not even their staunchest supporters would have imagined what would play out later that year.

East Bengal, spurred on by the rampaging Shyam Thapa and Subhash Bhowmick, tore apart the Mohun Bagan defence as the two met in the final of the IFA Shield at the Mohun Bagan ground. Thapa struck twice, with Bhowmick running rings around the Bagan defence as the Mariners were simply outclassed. Surajit Sengupta, Ranjit Mukherjee and Subhankar Sanyal scored once each as Bagan were mauled 5-0 in what is still the biggest margin of victory in the Derby.

And 22 years on, East Bengal would nearly repeat the act when they met Bagan in the semi-finals of the 1997 Federation Cup at the Salt Lake stadium. Coached by the legendary former footballer PK Banerjee, who incidentally was also in charge during the 5-goal mauling, East Bengal rode on a brilliant hat-trick by Baichung Bhutia simply outclassed their rivals 4-1 in front of 1,31,000 spectators that also remains a game record for attendance.

But the Mariners would hit back with good measure in yet another iconic Derby when Mohun Bagan under Karim Bencherifa’s charge met East Bengal in the I-League in 2009. The Salt Lake Stadium witnessed another historic humdinger as Nigerian Edeh Chidi struck four goals to lead the Mariners to a 5-3 win, to unleash unbelievable scenes of joy among its supporters who would go on to celebrate for days.

And it is now on to the HERO ISL, the country’s top tier league, where India’s iconic Big Two will look to stamp their authority, as well as give a new meaning to their century-old rivalry. The first encounter in November 2020 saw Bagan winning comfortably by a 2-0 margin. But come Friday, be prepared for another ding-dong battle, as history, legend, culture and the fierce will to upstage their rivals will ensure ATK Mohun Bagan and SC East Bengal to come out all guns blazing.