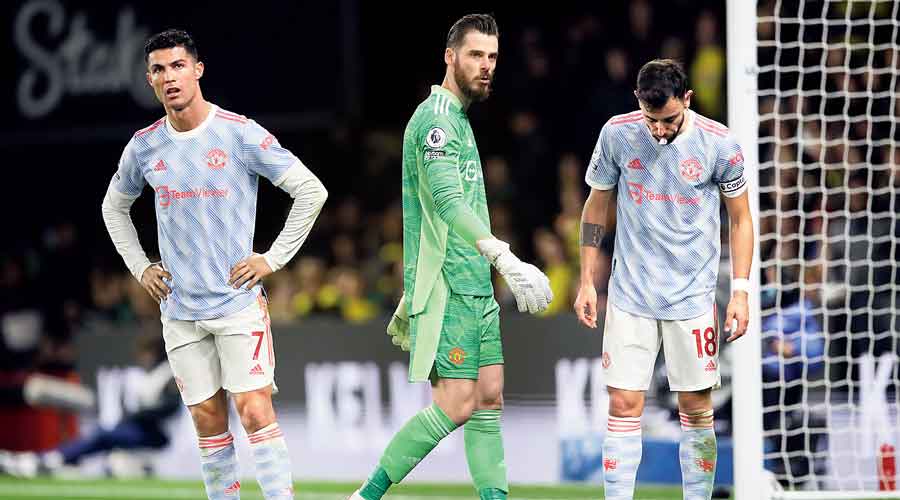 Manchester United suffered a fourth defeat in five Premier League games as they went down 4-1 at Watford on Saturday after finishing the game with 10 men to pile more pressure on manager Ole Gunnar Solskjaer.

The visitors were punished for a ragged first-half display with Joshua King and Ismaila Sarr on target for the hosts for whom Sarr also had a penalty saved by David De Gea, who then kept out Sarr’s retake after VAR ruled a player was in the area.

Substitute Donny Van De Beek inspired a revival after the break and halved the deficit in the 50th minute but United’s day was summed up when defender Harry Maguire was sent off for a clumsy tackle with 20 minutes remaining.

Watford made absolutely sure of a crucial win with a grandstand finish as stoppage-time goals by substitute Joao Pedro and Emmanuel Dennis sparked noisy celebrations at Vicarage Road.

It was a dreadful capitulation by United who face a crucial week with a Champions League tie against Villarreal before a trip to table-topping Chelsea next weekend.

Earlier at King Stadium against Leicester City, American forward Christian Pulisic was back among the goals

as Chelsea extended their advantage at the top of the table to six points with a comfortable 3-0 win.

The visitors raced into a two-goal lead inside 28 minutes after Antonio Rudiger climbed highest from a corner to head home and N’Golo Kante arrowed in a rare goal.

Leicester improved after the break, but Chelsea remained in control and put the game to bed when Pulisic, who has endured a frustrating, injury-interrupted season, stepped off the bench and scored in the 71st minute.

The victory, Chelsea’s fifth from six away league games this season, moved the Blues onto 29 points.

A stunning strike by Ollie Watkins and a late goal by Tyrone Mings gave Aston Villa a 2-0 win over Brighton & Hove Albion at Villa Park in Steven Gerrard’s first match as their new manager.

Villa scored in the 84th minute after substitute Ashley Young carried the ball out of defence and found Watkins, who cut in from the left before unleashing an unstoppable shot into the top corner.