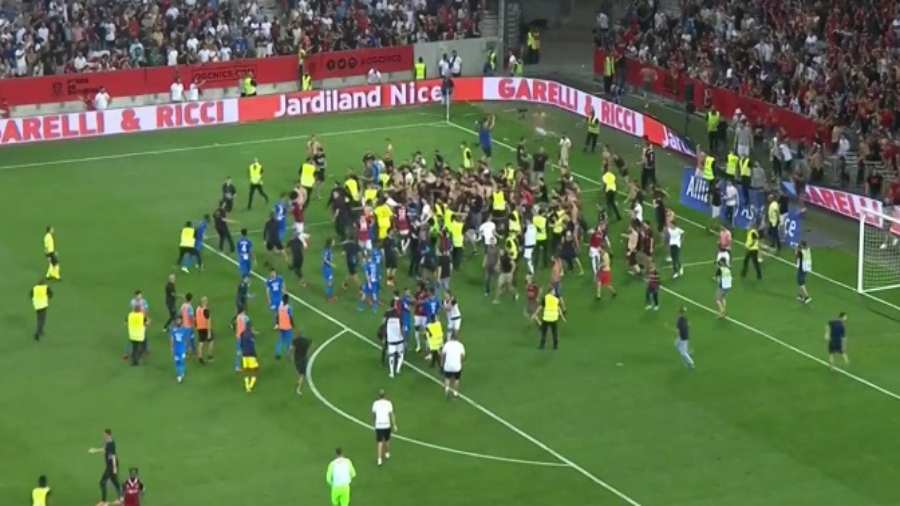 A French league soccer match between Nice and Marseille was abandoned when Marseille refused to restart the game after home fans earlier threw projectiles and invaded the field. The game had been interrupted with players leaving the field after home fans threw projectiles and invaded the pitch. Unverified photos on social media showed at least three players were injured.

The game had initially been suspended because of the fan violence with about 15 minutes to go on Sunday. When it was decided to restart play, with hosts Nice 1-0 ahead, Marseille refused to return to the field. Nice warmed up and the match was meant to restart with a Marseille corner. No visiting players were present to take the corner, the referee blew his whistle and the match was abandoned.

A real Malice in the Palace type situation at the French Riviera between Marseille and Nice.

If usual French league rules are applied, an automatic 3-0 victory will be awarded to Nice.

Nice supporters had already been warned against throwing objects by the stadium announcer when, with about 15 minutes remaining, Marseille midfielder Dimitri Payet was hit on the back by a bottle thrown from an area with Nice fans. Payet threw the bottle back into the crowd, prompting a significant number of Nice fans to rush the field.