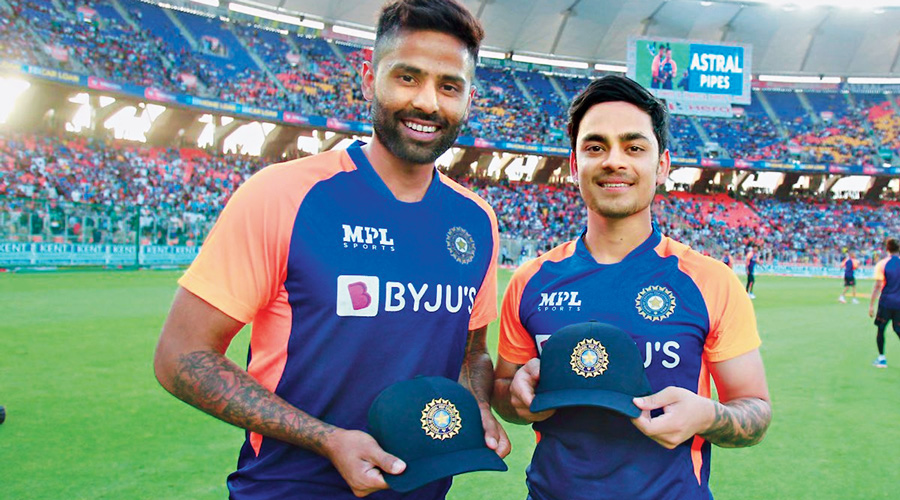 Suryakumar Yadav and (right) Ishan Kishan after receiving their India caps ahead of the second T20I against England in Ahmedabad.
Picture courtesy Twitter
Sayak Banerjee   |   Calcutta   |   Published 20.03.21, 01:52 AM

After four matches of shared spoils, it is almost impossible to point out the favourites for Saturday’s series decider. But whichever way it swings, one assumes that neither India nor England will yield even an inch without a fight.

India had to toil hard in the last game for an eight-run victory, but then T20Is are often decided by the narrowest of margins, which are as good confidence-boosters as big wins.

Also important was the fact that the chasing team did not win on Thursday. That has somewhat diluted the importance of winning the toss, otherwise after the first three games it seemed as if the secret of success lay in chasing.

India will be in a better frame of mind for sure. Much of the credit for that goes to their bowlers as they made better use of the conditions in the penultimate T20I. The quicks mixed it up well with the use of slower deliveries and slow bouncers during crucial phases of the game that denied a strong England batting line-up in batsmen-friendly conditions.

In terms of variation, the England bowlers lacked ideas in the last match. In the two games they won, their bowlers picked up early wickets when they got assistance from the pitch. But in the two matches where their bowlers couldn’t strike early, the likes of Sam Curran and Chris Jordan erred by bowling the same length and not mixing it up.

Bringing Moeen Ali back in the XI in place of either Curran or Jordan could be a good idea for the visitors. Playing two spinners in these conditions isn’t a luxury. Moeen’s ability with the bat is also superior to that of both Curran and Jordan.

Indians star playing shots all around the ground. If England have to win the series, they will have to find a way to stop him.

“I just followed the same process which I do while playing for my franchise. I knew this situation really well, so I wanted to do the same things. I just expressed myself,” Surya said at a virtual media interaction after Thursday’s game.

While Surya is likely to retain his place at No.3 in the batting order, it will be interesting to see where young Ishan Kishan is slotted in case he regains match fitness after missing the last game with a groin niggle.

If both Surya and Ishan are selected in the playing XI, the out-of-form KL Rahul might have to sit out the game. But that’s a call that captain Virat Kohli and head coach Ravi Shastri will have to take.

One hopes Kohli, who was absent from the field in the closing stages of Thursday’s match, is fit enough to lead the team in the crucial game.

On the bowling front, seamers Bhuvneshwar Kumar, Hardik Pandya and Shardul Thakur have combined well for India, while leg-spinner Rahul Chahar’s performance too has been better than what his senior teammate Yuzvendra Chahal had managed in the series.

For India, it will be important to negate the threat that Jason Roy and Jos Buttler present at the top of the England batting order. The aggressive duo overruns oppositions in quick time and so India, irrespective of whether they are bowling first or second, will have to look for early wickets.

England have top quality batting strength with the likes of Jonny Bairstow, Eoin Morgan and Ben Stokes following the openers. However, the big guns haven’t been consistent enough and India would know that if they are disciplined, they will be able to tame the No.1 T20I side in the world and pocket the series.