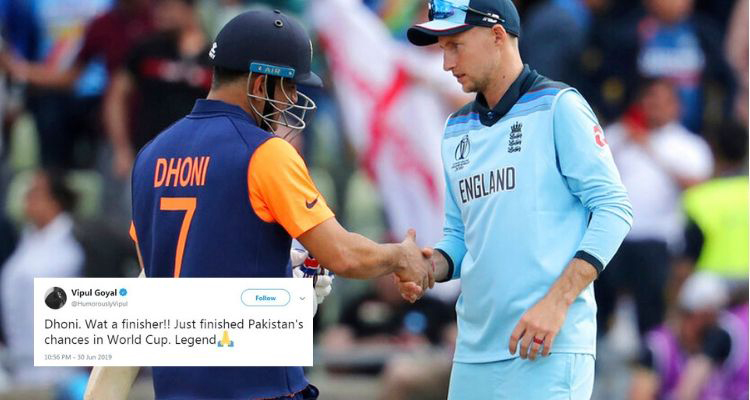 India lost the match, but creativity won the day.

Indian cricket fans may have been sorely disappointed by the result of the match against England, but they did not shy away from cracking hilarious jokes that somewhat ameliorated the pain of the loss.

The match was also important for England, who needed to win the tie, as well as the one against New Zealand on Wednesday, to stay in the ICC Cricket World Cup 2019. Clearly, England had more to lose from the match than India did.

If India had managed to defeat the English in Sunday’s match, it would have brightened Pakistan’s chances of making it to the semi-finals. No wonder, Pakistani fans were seen backing the Indian side for a victory.

When the Indian Twitterati took to the social media application, they produced memes that were the funniest we have seen.

The flood of memes on Twitter began after former England captain Naseer Hussain created a flutter when he asked Pakistani fans to choose a side to win. Tweets began pouring in after it emerged that Pakistanis will support their neighbour over the former colonizers. Sri Lanka and Bangladesh too saw huge support for Team India.

It was inevitable that the new ‘saffron’ jersey would be targeted.

MS Dhoni’s batting has been as big an issue in this world cup as India’s No 4 batting slot. After a couple of slow innings earlier in the tournament, Dhoni had another slow day against England. This too was the subject of many a joke.

Dhoni waiting for the 49th over. pic.twitter.com/uI0VWl7EiN

India’s loss also means it it becomes extremely difficult for Pakistan to qualify for the semi-finals. Needless to say, Pakistan fans were not happy.

Dhoni after hitting six on the very first ball of 50th over:#indiavsEngland#IndvsEng pic.twitter.com/gYFahN3mZp