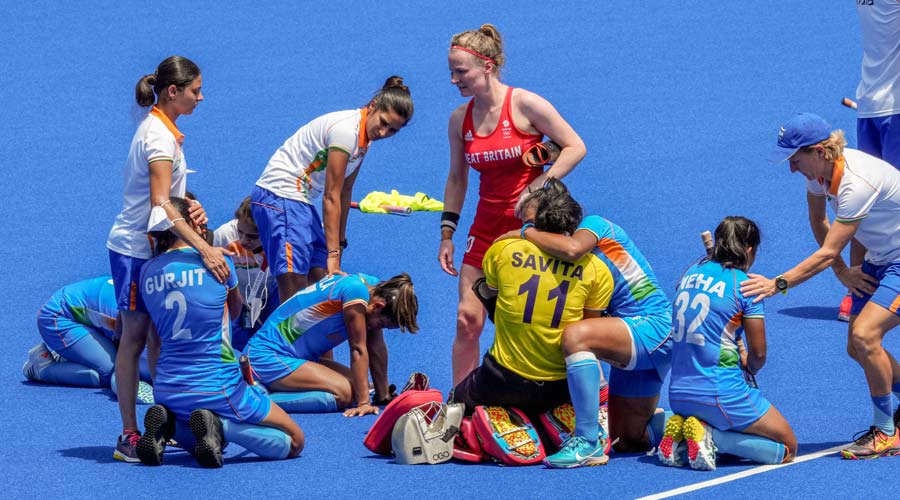 As the final whistle blew after the India versus Great Britain bronze medal playoff match of the Tokyo Olympic Games on Friday, the likes of Rani Rampal and Savita Punia slumped to the ground in tears.

They lost the match 4-3 and with that ended their dream of winning a medal for the first time in women’s hockey. They should not feel disheartened by the defeat, though. Because when nerves calm down, they will realise that what they have achieved in Tokyo is beyond anybody’s imagination. A team of rank outsiders stunned the world by playing the bronze playoff.

They fought valiantly and sent a message to the rival teams. Henceforth, ignore us at your own peril.

On Friday, even when down 0-2, they came back strongly to score three goals (Gurjit Kaur in the 25th and 26th minutes) and Vandana Katariya (29th). After Grace Baldson scored the fourth goal off a penalty corner, Indian women gave their all to restore parity. Unfortunately, it was not their day.

Salima Tete, Savita, Rani, Gurjit and Vandana have all made us proud with their brilliant display. There is no shame in this heartbreaking defeat.

One of the reasons for the success of the men’s and the women’s teams was the fact that there was no superstar or a prima donna. In the past, we have seen one or two players thinking they were bigger than the team, and they let the team down. But in Tokyo, what we saw was completely different.

Both the teams believed in teamwork and for that much credit goes to the two coaches, Australian Graham Reid and Dutchman Sjoerd Marijne. They inculcated team bonding and there was no place for ego. That’s their USP in Tokyo.

Now that the teams have caught the imagination of the country, the players will get a lot of attention wherever they go. The accolades and constant media attention may make you believe you are larger than life. It will be interesting to see how Reid or Marijne’s successor (he announced Friday’s match was his last) deal with the situation.

Tokyo has been a happy hunting ground for Indian hockey. In 1964, we got back the gold we lost in the Rome Olympics, by beating Pakistan. In 2021, 41 years since the Moscow triumph, the men won an Olympic medal in the same city and the women finished fourth.

In women’s hockey, India’s best performance in the Olympics before this was a fourth-place finish in Moscow, but there were no semi-finals in that edition. Only six teams competed in a round-robin format and the top two featured in the final.

The future looks bright for the sport in India. The Commonwealth Games (in Birmingham) and Asian Games (Hangzhou in China) are lined up for next year. Expectations will be sky-high after the resurrection in Tokyo.