Qatar’s Mutaz Essa Barshim adds an Olympic gold to his list of accolades and persuades organisers to let him share it with his friend and rival, Gianmarco Tamberi 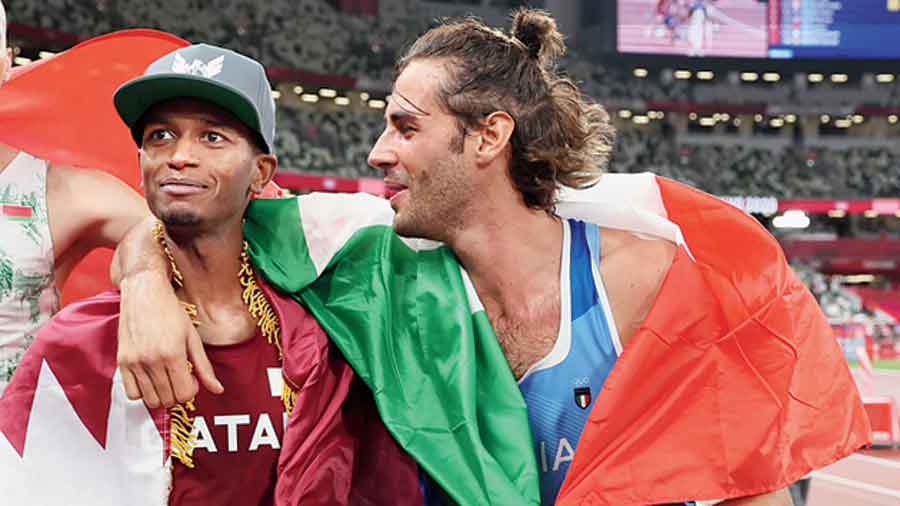 Qatar’s Mutaz Essa Barshim added an Olympic gold to his list of accolades in the men’s high jump in Tokyo on Sunday — and persuaded organisers to let him share it with his friend and rival, Italy’s Gianmarco Tamberi.

Both Barshim, 30, and the 29-year-old Tamberi ended with jumps of 2.37 metres and had no failed attempts until they attempted to clear 2.39.

After three failures each at that height, an Olympic official, who first offered them a jump-off to decide the winner.

“Can we have two golds?”, Barshim asked him.

The official nodded, and the two athletes clasped hands and whooped for joy.

“I look at him, he looks at me, and we know it. We just look at each other and we know, that is it, it is done. There is no need,” Barshim said.

“He is one of my best friends, not only on the track, but outside the track. We work together. This is a dream come true. It is the true spirit, the sportsman spirit, and we are here delivering this message.”

It was also a win-win situation for the Italian, who broke his ankle days before the Rio Games in 2016.

Yulimar Rojas of Venezuela jumped 15.67 metres on Sunday to smash the world record in the women’s triple jump with her final attempt, having already secured the gold medal. The previous record of 15.50m was set by Ukraine’s Inessa Kravets in 1995 in Sweden.

“I was looking for it, I knew we had that distance in my legs to get it today. I was failing a bit in the technical aspect but the last jump was one to give everything, and it was like that,” she said.

On a day of surprises at the Ariake Gymnastics Centre, Dolgopyat, twice a world silver medallist on the floor, was congratulated by his Prime Minister after upgrading to gold by a whisker to take his country’s first Olympic title since 2004 and only its second ever.

Nina Derwael replicated that feat on behalf of Belgium on the uneven bars.

Dolgopyat posted a score of 14.933, the same as Spain’s Rayderley Zapata. But the Israeli took top spot on the podium because his floor routine had a higher degree of difficulty. “How we waited to see the Israeli flag raised,” tweeted PM Naftali Bennett, who later called up the 24-year-old.

World No. 5 Alexander Zverev won the biggest title of his career when he crushed Russian Karen Khachanov 6-3, 6-1 to win the men’s singles tennis gold medal.

The 24-year-old was in stunning form as he demolished Khachanov in 79 minutes to become the first German man — and the second German after Steffi Graf — to win a singles Olympic gold in tennis. Zverev had  defeated world No. 1 Novak Djokovic in the semi-finals.