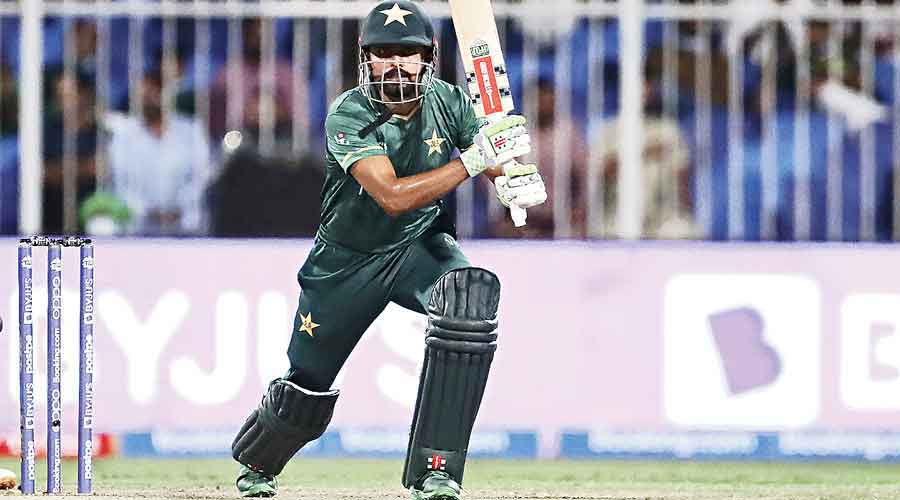 Pakistan captain Babar Azam plays a shot during their match against Scotland in Sharjah on Sunday.
AP/PTI
Our Bureau   |   Published 08.11.21, 02:07 AM

Captain Babar Azam (66) scored his fourth half-century in this T20 World Cup and veteran Shoaib Malik smashed an unbeaten 54 at a strike rate of 300 that laid the foundation for Pakistan as they walloped Scotland by 72 runs in Sharjah on Sunday to finish the Super 12 stage with victories in all five matches.

Keeping their intensity intact, Pakistan will go into the semi-finals as the only team not to lose any game in the Super 12s. That does bode really well for Babar and his men when they face Australia in the second semi-final in Dubai on Thursday.

Winning the toss and opting to bat first in order to make the bowlers get used to bowling when the ball gets wet because of the dew, Pakistan first rode their skipper’s composed and fluent 47-ball knock that laid the platform for Malik to go ballistic at the death. With an aggreagate so far of 264 runs, Babar is the top run-getter in this World Cup at present.

The 39-year-old turned back the clock and smashed as many as six maximums, much to the delight of his wife and Indian tennis ace Sania Mirza, who too was there at the Sharjah Cricket Stadium stands. Some freebies that the Scotland bowlers served also helped Malik, but there’s no denying the fact that he ensure to capitalise even when there was minimal room and width on offer.

When Babar departed, there were only 15 balls remaining in Pakistan’s innings. But thanks to Malik, Pakistan hammered 47 off those remaining balls to finish at 189/4, a total that was way too daunting for the Scotsmen. Particularly, with the Pakistan bowlers in such rousing form.

Thereafter, by the end of the 11th over of Scotland’s reply, Pakistan had more or less wrapped up the game when they had the opposition reeling at 41/4 at that period. In the end, all what the Scotsmen could manage was a meagre 117 for the loss of six wickets.