They are well-guarded against complacency, as it was evident from leg-spinner Adil Rashid’s words at the pre-match media conference 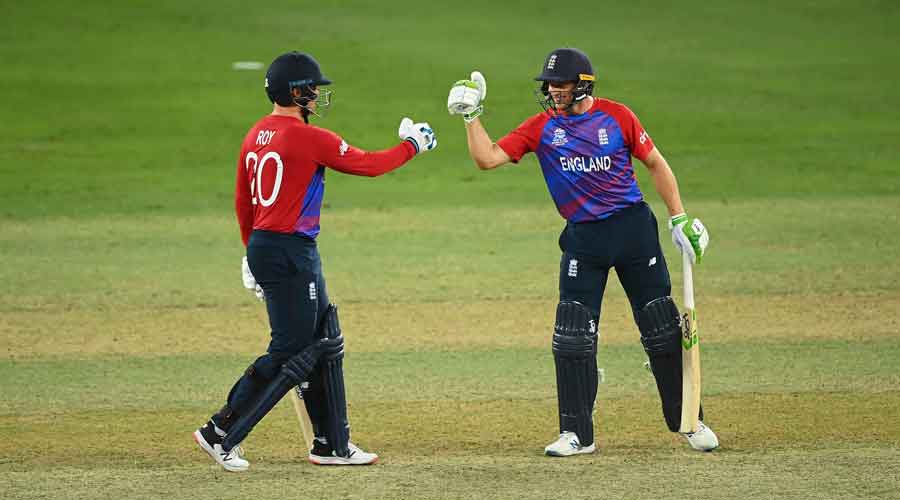 Not only have England been unbeaten, their wins have all been comfortable and convincing ones.
Twitter/@T20WorldCup
Our Bureau   |   Published 01.11.21, 02:24 AM

England have been clean, crisp and confident in the T20 World Cup so far, winning all the three matches they have played. And if they pick up their fourth win on Monday, when they face a struggling Sri Lanka in Sharjah, the Englishmen can also book a spot in the semi-finals.

Not only have England been unbeaten, their wins have all been comfortable and convincing ones. They have dominated oppositions with discipline, the latest being the complete annihilation of Australia on Saturday.

It’s needless to say that Sri Lanka, who have lost two of their three games so far, have to pull out something extraordinary if they are to stop the English juggernaut and keep alive their semi-final chances.

While the Lankans will perhaps need a special performance, England just need to stick to their process, which appears to be a very well planned one. Their execution of plans has also been superb, with team game being their forte.

They are also well-guarded against complacency, as it was evident from leg-spinner Adil Rashid’s words at the pre-match media conference.

“Obviously winning the first three games… sets us up well. But from our side, we’re taking it a game at a time. Whatever has happened has gone now. That’s in the past,” Rashid said on Sunday.

Rashid and Moeen Ali, who bowls off-spin, have served England decently so far. But against the Lankans, who are good players of spin, the English quicks — Chris Woakes, Tymal Mills and Chris Jordan — will perhaps have to play a bigger role.

Sri Lanka, despite the inexperience in their side, have actually not played badly so far. The last-over loss against South Africa was a game which they could have won. Youngsters like Pathum Nissanka, Charith Asalanka and Wanindu Hasaranga have put in some good performances. And if all of them come together on Monday, who knows, they can just surprise Eoin Morgan’s team.

But Morgan would be a confident captain. Not just his bowlers, his batting unit too has been quite powerful. The way Jos Buttler decimated the Aussies in the last match would be scary for any opposition bowling attack.

One important factor on Monday could be the Sharjah wicket, which hasn’t really been friendly to the batsmen.