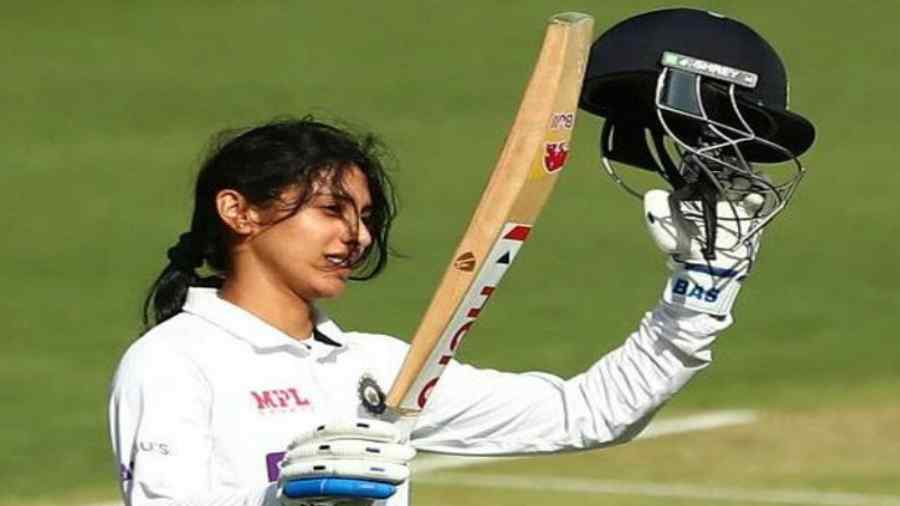 Smriti Mandhana became the first Indian woman to score a pink-ball Test century in the ongoing day and night Test against Australia in Carrara on Friday.

Smriti achieved the feat on Day Two of the match, after the opening day was cut short due to rain.

India were comfortably placed at 132/1 at the close of play on Thursday, with Smriti batting on a sublime 80 and Punam Raut unbeaten on 16.

India were 101 for 1 at the dinner break, after which lightning delayed the start of play for a while.

How the pink ball and Smriti became friends

Smriti familiarised herself with the pink ball by keeping one in her kit bag for the last three months, looking at it on and off while trying to "understand" it.

"We just had two sessions with pink ball. I was coming from the Hundred (in England) so I didn't really get much time to play with pink ball, but during Hundred, I just ordered a pink kookaburra ball, just to keep it in my room because I knew that there is going to be a Test match, so that I can just look at the ball and understand.

"I have actually not batted, I batted for just two sessions but the pink ball was there in my kit bag for last two and half, three months. I don't know why did I carry it, I thought I will have a session but I really didn't get time to do that," Smriti had said during a virtual press conference on Thursday.

Smriti is relishing being part of a multi-format tour of a tough cricket-playing nation such as Australia.

"I am loving this multi format series, go and bat with few slips and gully so you have to apply yourself, that really tests you.. You have to focus .. switch on and switch off," she said.

"Test cricket is always about different challenges and we would always want to play as may Tests as possible."