Karatsev continued his stunning run into the semi-finals, beating an ailing Grigor Dimitrov 2-6, 6-4, 6-1, 6-2 to become the first man in the Open era to reach the last four in his maiden Grand Slam 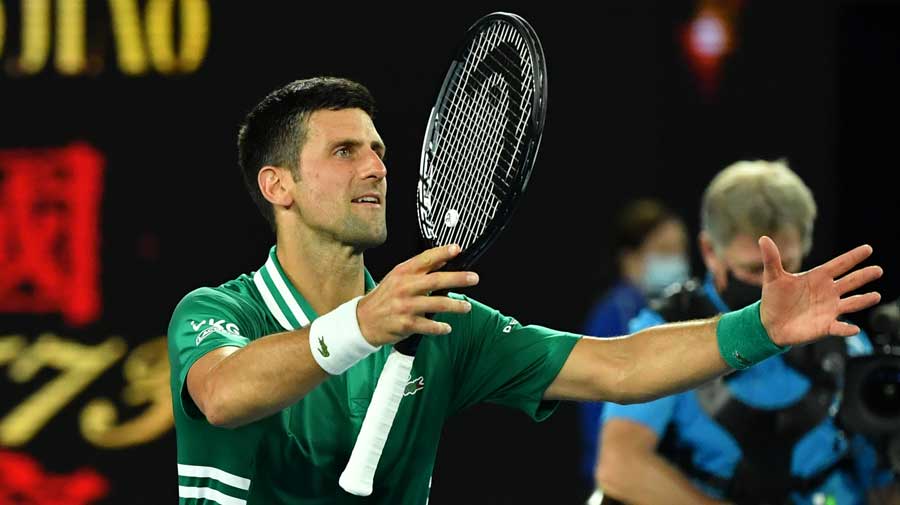 The Serbian world No.1 hit back strongly after losing a tight opening set on a tie-break. He trailed in both the third and fourth sets before turning them around. Germany’s Zverev will rue allowing Djokovic back from 1-4 down in the third set and he was also up 3-0 in the fourth.

Djokovic again wore tape on his abdominal area, a legacy of the injury picked up in his third-round win over Taylor Fritz. But it did not appear to bother him as he reached his 39th Grand Slam semi-final, where he will face an unlikely opponent in Russian qualifier Aslan Karatsev.

Karatsev continued his stunning run into the semi-finals, beating an ailing Grigor Dimitrov 2-6, 6-4, 6-1, 6-2 to become the first man in the Open era to reach the last four in his maiden Grand Slam.

The world No. 114 was also only the fifth qualifier to reach the last four of a men’s major in the Open era and the lowest-ranked player to reach a Grand Slam semi-final in two decades. “It’s an unbelievable feeling, first time main draw, first time semis,” said the 27-year-old.

Dimitrov, who had not dropped a set on his way to the quarter finals, said he had suffered a back spasm on Monday and struggled to put his socks on before the match.

Serena Williams came through a huge test to reach the last four at Melbourne Park for the ninth time with a 6-3, 6-3 victory over Simona Halep.

The 39-year-old went toe-to-toe with the Romanian second seed over 80 minutes at theRod Laver Arena before she was finally able to move to within two victories of a record-equalling 24th Grand Slam title.

Serena hit some ferocious forehands and moved around the court with a freedom that she has not enjoyed for a good while to set up a semi-final meeting against in-form Japanese third seed Naomi Osaka.

Osaka has never lost a Grand Slam after making the quarter finals and if all goes to plan here, she will be savouring a fourth major triumph before her 24th birthday.

Osaka reached the semi-finals with a clinical 6-2, 6-2 win over Hsieh Su-wei two years after suffering a big scare in an emotional rollercoaster of a match against the Taiwanese maverick at the 2019 tournament.

“I would say for me today it was really important to have a plan just because she’s an opponent with whom I’m not really sure what’s going to happen,” Osaka said of the mercurial Hsieh, who beat her at Miami in 2019.