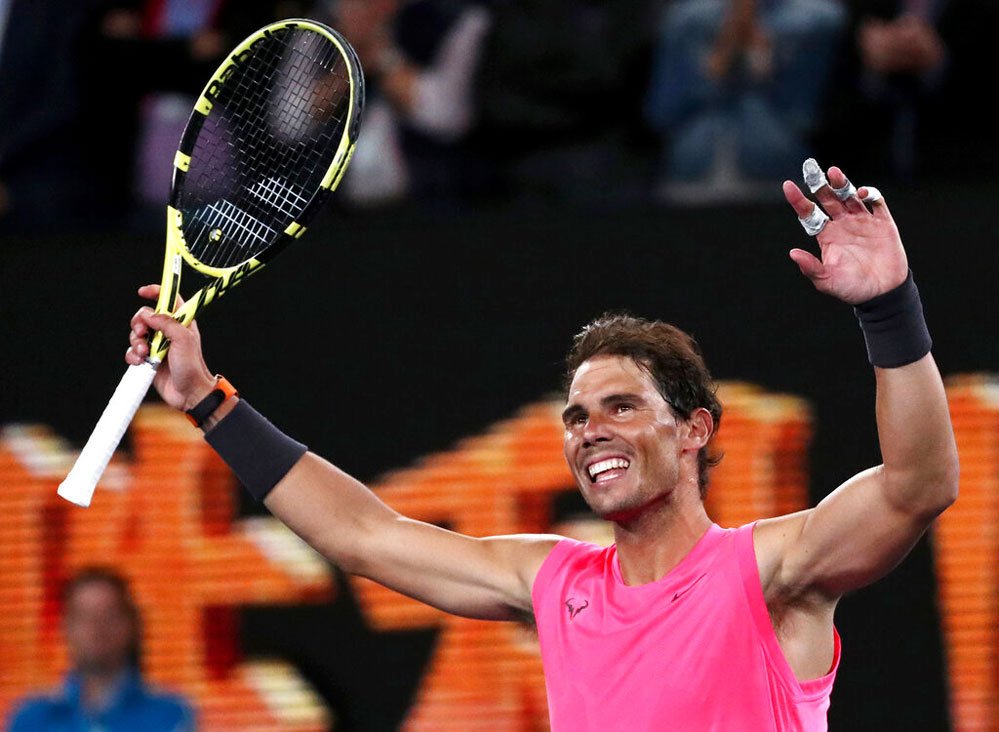 Rafael Nadal passed up a good few chances for an earlier finish to his night before muscling his way into the third round of the Australian Open with a commanding 6-3, 7-6 (4), 6-1 victory over Argentine Federico Delbonis on Thursday.

The match lacked nothing in quality power tennis but was almost entirely devoid of drama and the most notable incident came late in the third set when the ball flew off top seed Nadal’s racket and hit a ballgirl on the head.

The 19-time Grand Slam champion raced over to check she was alright and then planted a kiss on her cheek, drawing a huge cheer from the Rod Laver Arena crowd.

“It probably was one of the scariest moments on the tennis court because the ball was straight to the head,” said Nadal. “I’m glad she’s okay, she’s very brave.”

Flamboyant Nick Kyrgios suffered a fright before reaching the third round on Thursday as the weather-disrupted tournament faced a new challenge: dirty rain, which left courts muddy and unplayable. After a day of clean-up operations and delays, Australia’s Kyrgios fought his way past Frenchman Gilles Simon 6-2, 6-4, 4-6, 7-5.

Alexander Zverev put his serving woes behind him as he cruised into the third round with a dominant 7-6(5), 6-4, 7-5 win over Belarusian battler Egor Gerasimov.

Zverev wavered when serving for the match at 5-3, allowing World No. 98 Gerasimov to break back and level to 5-5, but the combustible German talent wrapped up the contest soon after with a barrage of stunning forehand winners.

Zverev said the pressures of social media made it harder for the new generation of players compared to when the likes of Roger Federer were trying to break through.“I think it’s different than it was 20 years ago,” said the seventh seed. “I think with the social media, with the mobile phones, the pressure the media puts on us… It’s maybe more difficult for us now.”

However, fifth seed Dominic Thiem was taken to five sets by Australia’s 140th-ranked Alex Bolt before recovering to win 6-2, 5-7, 6-7 (5/7), 6-1, 6-2. Fourth-seeded Daniil Medvedev insisted a mid-match nosebleed was not a serious problem as he overcame an underarm serve and stiff resistance from Spanish qualifier Pedro Martinez Thursday to win 7-5, 6-1, 6-3.

Sania Mirza’s first Grand Slam outing after maternity leave ended with an early exit as the Indian ace retired mid-way into her women’s doubles first-round match due to a calf injury, here on Thursday. Sania and Ukrainian partner Nadiia Kichenok were trailing 2-6 0-1 against the Chinese team of Xinyun Han and Lin Zhu when the Indian called it quits.