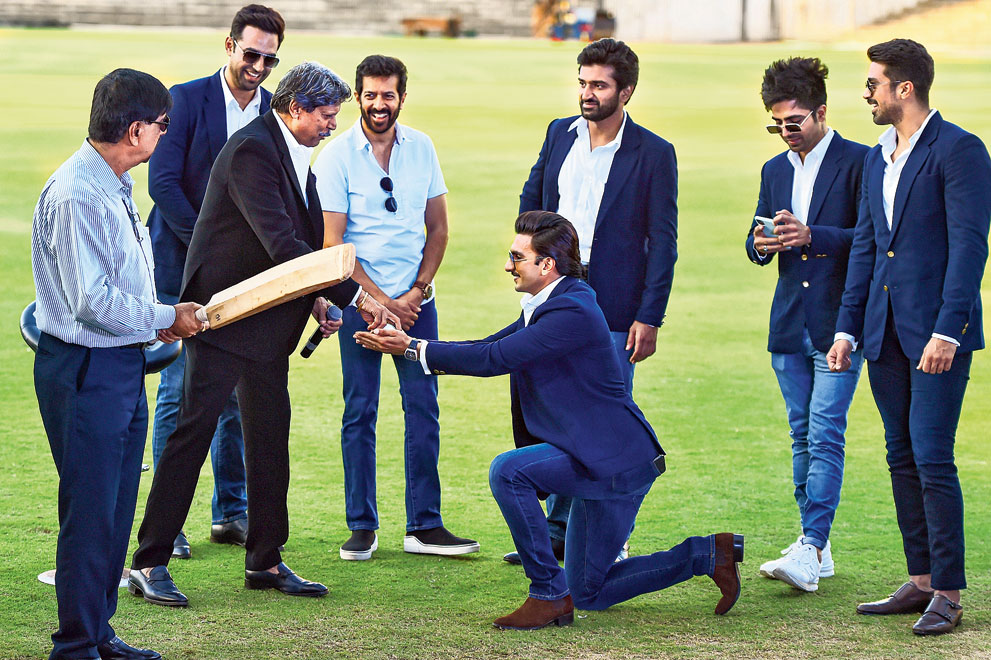 Actor Ranveer Singh shares a light moment with Kapil Dev as Krishnamachari Srikkanth (left), director of the movie 83 Kabir Khan (fourth from left) and other members of the cast watch during a promotional at the MA Chidambaram Stadium in Chennai on Saturday
(PTI)
PTI   |   Chennai   |   Published 25.01.20, 08:23 PM

It is the job of a talented cricketer like Rishabh Pant to prove his detractors wrong, legendary India all-rounder Kapil Dev said on Saturday.

Of late, Pant has found himself at the receiving end of criticism for his inconsistency in the field while playing for India.

“Pant is so talented. He cannot blame anybody. He has to look after his own career. The only way for him is to keep on getting runs and prove everybody wrong. When you are talented, it is your job to prove people wrong,” India’s first World Cup-winning captain said.

Kapil was responding to a question on the young Delhi wicketkeeper being benched as the think-tank opted for KL Rahul to don the big gloves in the second and third ODIs of the recent ODI series against Australia and the first T20I against New Zealand on Friday.

“The players have to look after themselves. They should never give the option to the selectors to drop them or give them a rest.”

Kapil was in the city in connection with the promotion of the upcoming film, 83, based on India’s historic victory in the 1983 World Cup in England.

On Rahul being handed the keeper’s job in place of Pant, he said: “It is the team management’s call. I don’t know about these things. It is not my decision.

Asked about the Indian fast bowlers getting injured often these days, he said: “When you play 10 months in a year, you will get injured.

“You have to look after the fast bowlers. The conditions and weather in India is more challenging than other parts of the world. The team management will have to take care of them.”

On whether he was worried about all-rounder Hardik Pandya’s frequent injury issues, Kapil, in his typical style, said, “Pandya has to be worried. He should be worried about how fast he can get fit and come back into the team. That’s important. He has to look after himself.”