Manchester United climbed to fifth on 17 points from 10 games 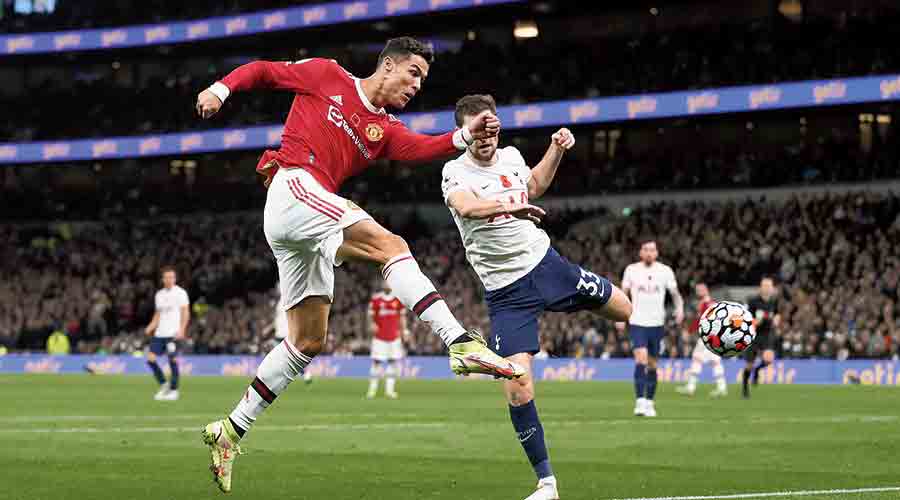 Ronaldo struck in the 39th minute with a perfect right-foot volley into the far corner of Hugo Lloris’s net from a glorious pass by Bruno Fernandes.

Cavani added the second in the 64th and substitute Rashford wrapped up a comfortable win four minutes from time as United put last weekend’s 5-0 home drubbing by Liverpool behind them.

United climbed to fifth on 17 points from 10 games, while Nuno Espirito Santo’s shot-shy Spurs side, who failed to trouble United goalkeeper David De Gea, are eighth on 15.

Crystal Palace’s Wilfried Zaha and Conor Gallagher scored a goal each to stun champions Manchester City with a 2-0 win at the Etihad Stadium.

Palace took the lead in the sixth minute when Zaha’s scuffed left-footed shot found its way past Ederson after Aymeric Laporte had been caught in possession by Gallagher.

The visitors pressed furiously in the opening exchanges as City’s midfield were allowed little time on the ball, leading to a number of stray passes and few clear chances in front of goal.

Laporte’s dismal afternoon came to a premature end in first-half stoppage time when he was shown a straight red card for bringing down Zaha and denying the Ivory Coast international a goal-scoring opportunity.

City, however, found their stride after the break and Gabriel Jesus had the ball in the net on the hour-mark, only for it to be chalked off after Phil Foden was found to have been offside in the build-up.

Manager Pep Guardiola threw on Riyad Mahrez and Raheem Sterling in the search for an equaliser, but Gallagher put the game beyond doubt in the 88th minute with an excellent finish following a swift Palace counter-attack.

Arsenal goalkeeper Aaron Ramsdale makes a save during their match against Leicester City on Saturday.
Getty Images

At Anfield, Brighton & Hove Albion fought back from two goals down to earn a 2-2 draw against Liverpool, as Enock Mwepu and Leandro Trossard spoiled what would have been a perfect week for the Merseyside club.

Liverpool looked set to march on after goals from Jordan Henderson and Sadio Mane put them in control.

Henderson fired the home side into a fourth-minute lead with a first-time shot from the edge of the penalty area after he was teed up by Mohamed Salah, and Mane made it 2-0 with a diving header in the 24th from Alex Oxlade-Chamberlain’s cross.

Brighton pulled one back in the 41st minute out of the blue as Zambian midfielder Mwepu scored his first Premier League goal with a delightful long-range effort that sailed over Liverpool goalkeeper Alisson Becker.

Brighton gained the upper hand after the break and drew level in the 65th minute when Trossard side-stepped his marker and drove a low shot past Alisson.

At St James’ Park, even without a recognised striker on the pitch Chelsea proved far too strong for Newcastle United as Reece James struck twice to fire the league leaders to a 3-0 win.

The painfully unambitious hosts managed to hold out for 65 minutes before James smashed a left-footer past Karl Darlow before belting a right-foot shot into the same part of the net 12 minutes later.

Jorginho’s converted penalty in the 81st minute emphasised the domination of Thomas Tuchel’s team who could not have asked for a better day with title rivals City and Liverpool both dropping points.

Chelsea lead the standings with 25 points, three ahead of Liverpool and five ahead of City. Newcastle, for all the riches of their Saudi Arabian owners, are deep in relegation trouble in 19th place with four points.

Goalkeeper Aaron Ramsdale was the star of the show as Arsenal made it nine games unbeaten in all competitions with a 2-0 victory at Leicester.

Arsenal have been steadily improving under coach Mikel Arteta after a difficult start to the season, following on from last term’s eighth-placed finish.

The victory that kept Arsenal climbing the table on Saturday came about thanks to the big helping hands of their goalkeeper.

Arsenal flew out of the traps at the King Power Stadium, taking a two-goal lead inside 18 minutes through Brazilian centre Gabriel Magalhaes and livewire Emile Smith Rowe.

Leicester grew into the match after their laboured start and had several chances to get themselves back into the contest before half-time, only to find Gunners keeper Ramsdale in inspired form.

Ramsdale’s leap to keep James Maddison’s free-kick out just before half-time was a contender for save of the season, as he clawed the ball away in spectacular fashion to prevent it flying into the top corner.

After the break, Leicester continued to create chances which on another day they would have converted, but Ramsdale refused to be beaten, bailing his side out time and again to ensure a vital victory on Arsenal’s road to recovery.

“It is a superb result away from home against a top team,” Ramsdale said.