Slippery conditions caused injuries in back-to-back matches on Tuesday, affecting the fortunes of two of the sport’s most venerated stars 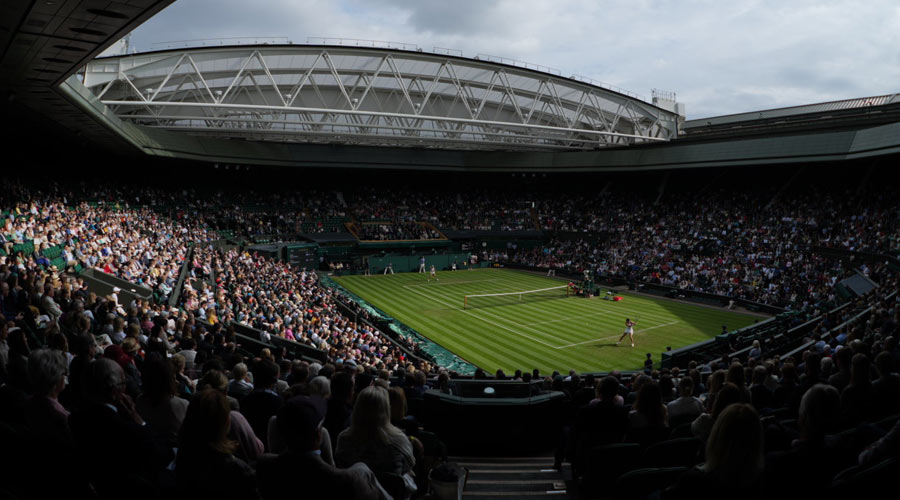 Matches continued on Centre Court at Wimbledon as rain fell outside on the first two days of the tournament. And while the rain wasn’t falling inside Centre Court, the players were. At their best, fast, low-bouncing grass courts encourage engaging, all-court tennis that rewards risk and punishes passivity.

At their worst, the courts’ slick surface allows flat-soled tennis shoes to skid and players to crumple to the ground, often in pain.

Slippery conditions caused injuries in back-to-back matches on Tuesday, affecting the fortunes of two of the sport’s most venerated stars. First, Roger Federer advanced after his opponent, Adrian Mannarino, slipped and sustained a knee injury while leading two sets to one.

In the match that followed, seven-time Wimbledon champion Serena Williams slipped and aggravated a hamstring injury, forcing her to stop her first-round match against Aliaksandra Sasnovich after just six games and abandon what many considered one of her last best chances to win an elusive 24th major title.

Federer was in his post-match news conference when he was informed of Serena’s injury. He let out an exasperated, rueful: “Come on.”

“This is obviously terrible, that it’s back-to-back matches and it hits Serena as well,” he said. “Oh, my God, I can’t believe it.”

Serena and Mannarino were the only two players forced to retire through the first two days of the tournament, suggesting that conditions on Centre Court were considerably more treacherous than elsewhere on the All England Club’s 17 other courts.

Sasnovich, Serena’s opponent, said the court was so slippery that she didn’t run to retrieve wide-angled shots as she normally would. Serena’s one-time mixed doubles partner Andy Murray, who played on the court a day earlier, said the surface made moving around difficult.

Wimbledon added its retractable roof to Centre Court only in 2009, and a roof to the secondary No. 1 Court in 2019. An extensive ventilation system was installed along with the roof, but the grass remains dewy.

“I do feel it feels a tad more slippery, maybe, under the roof,” Federer said.

In a statement issued on Tuesday evening, the All England Club defended the condition of its courts. “The preparation of the grass courts has been to exactly the same meticulous standard as in previous years,” the club said. “Each grass court is checked by the grand slam supervisors, referee’s office and grounds team ahead of play commencing, and on both days of the fortnight they have been happy with the conditions and cleared the courts for play.

“The weather conditions on the opening two days have been the wettest we have experienced in almost a decade, which has required the roof to be closed on Centre Court and No. 1 Court for long periods.”

Novak Djokovic remarked on Saturday about what an honour it was to walk onto the “virgin grass” of Centre Court. In his four-set win over Jack Draper on Monday, Djokovic awkwardly fell to the ground several times.

“To be honest, I don’t remember falling this many times on the court,” Djokovic said in his on-court interview after the match.

This is not the first edition of Wimbledon plagued by falls. In 2013, stars, including Maria Sharapova, Victoria Azarenka and Caroline Wozniacki, were injured after slipping on the grass.

Player safety is a concern to which tennis authorities have not always seemed especially responsive. At the Italian Open in Rome last month, Rafael Nadal tripped over a line that had come unpinned from the clay court.

At the Australian Open, tournament officials have been slow to stop play during both extreme heat and poor air quality resulting from nearby wildfires.

Wimbledon, which treasures tradition, is unlikely to reconsider its hallmark green grass.