The victory has helped the team to a fair extent as they are now at No.4 with eight points 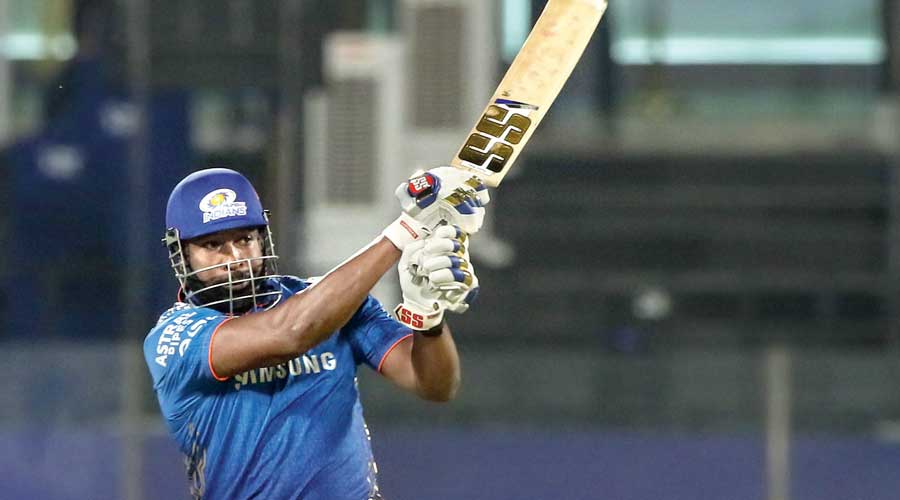 Man of the Match Kieron Pollard of Mumbai Indians during his unbeaten 87 against Chennai Super Kings in New Delhi on Saturday.
PTI photo
Sayak Banerjee   |   Calcutta   |   Published 02.05.21, 02:13 AM

When Kieron Pollard gets going, bowlers and the rest of the fielding side are certainly in for a very tough time. And if you drop him at a critical stage of the game, you are doomed.

Despite posting a mammoth total of 218/4 after being put in on a belter, they paid the price for letting Pollard (87 not out off 34 balls) off with Faf du Plessis, one of their safest fielders, dropping him on 68 in the deep. Pollard added 19 more runs with a brief cameo from Hardik Pandya aiding him in the last couple of overs as Mumbai Indians pulled off a massive four-wicket win at the Kotla on Saturday.

The win snapped CSK’s winning streak, though they remain at No.1 in the standings. But it helped Mumbai to a fair extent as they are now at No.4 with eight points. 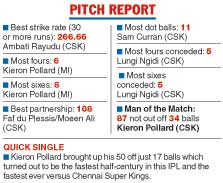 More importantly, their net run rate is back to being at positive.

CSK rode half-centuries from Moeen Ali and Du Plessis, both of whom shared a valuable 108-run stand that laid the foundation for their side before Ambati Rayudu (72 not out off 27 balls) provided them with a flourishing finish.

Captain Rohit Sharma and Quinton de Kock then gave Mumbai a brisk start. But soon after, they lost three quick wickets, slumping to 81 for three in the 10th over from 71 without loss in the eighth.

In walked Pollard and from the onset, flexed his muscles to keep depositing the ball into the stands. It was all about brutal force from Pollard as even one or two mistimed shots of his disappeared into the orbit.

Obviously, had Du Plessis not spilled that chance, CSK could well have wrapped up the game. Even off the final over, Mumbai needed 16 which was really tough as it was all up to Pollard then as Sam Curran, despite taking a bit of a stick early in the penultimate over of the game, picked up both Hardik and James Neesham in three balls to make it stiffer for the defending champions.

Lungi Ngidi, the most expensive bowler in the game, did bowl a couple of dot balls as Pollard turned down ones. He knew he had to do it all alone.
Fortune too favoured him a little bit as a yorker-length delivery from Ngidi — the second ball of the final over — went between Pollard’s legs after he got some bat on it and raced towards the boundary for a four.

But thereafter, Ngidi messed it up with two full tosses that yielded Pollard a four and a six before he ran hard off the last ball to pick up the two runs required for victory.

Pollard indeed played a breathtaking knock, but it also boils down to CSK bowling too many loose deliveries during the early part of Mumbai’s reply and also when Krunal Pandya and Pollard stitched together an 89-run stand for the fourth wicket that brought the five-time champions back into the contest and also revived their hopes of a win.

“I know it’s always tough for the bowlers on a good pitch and smaller ground. We wanted to stay positive once we finished bowling our 20 overs. We got a good start and saw what happened.

“We just had a brief chat at the innings break and said it was a good pitch. We had shot-makers in our batting line-up and we just wanted to take the game till the end.”