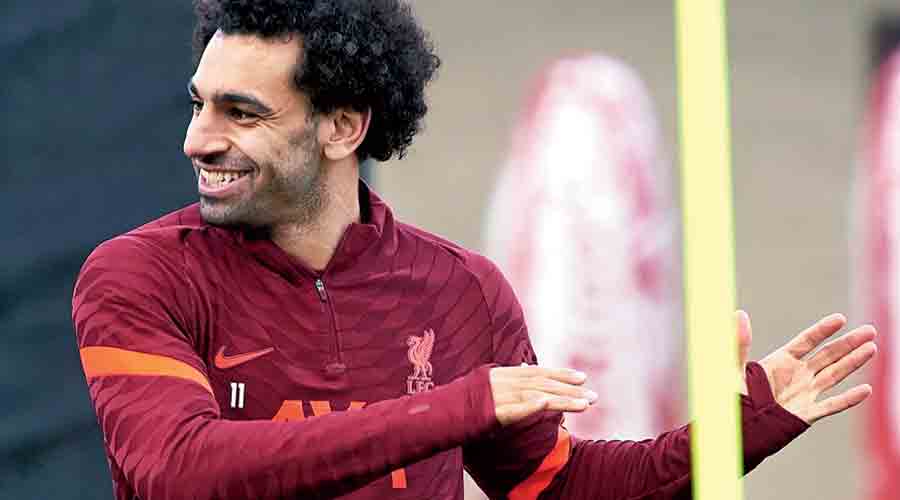 Manchester United manager Ole Gunnar Solskjaer said he would always back Cristiano Ronaldo to score goals but conceded on Friday that Liverpool forward Mohamed Salah is in the form of his life ahead of Sunday’s Premier League clash at Old Trafford.

Salah leads the Premier League goal scoring charts with seven goals and also has four assists in eight games while he also has five strikes in the Champions League.

Liverpool manager Juergen Klopp did not want to compare the two forwards earlier on Friday but Solskjaer praised Salah and also his teammates on the frontline — Sadio Mane, Roberto Firmino and Diogo Jota.

“I’ll always back Cristiano in any competition, he’s unique and his goal-scoring record is fantastic but that being said, Salah is on fire,” Solskjaer told reporters.

“You see some of the goals he’s scored lately, we know we have to be at our best to defend against him. Players like him don’t come along very often. We have to enjoy these players from afar — not Sunday, that’s too close.

“Not just him, I’m a big admirer of their frontline for many, many years. Mane, Firmino, maybe Jota will play. They are players you should be focused on for 95 minutes to keep a clean sheet.”

Liverpool are the only unbeaten team in the league this season and have scored at least three goals in each of their last eight away games in all competitions.

“They’re on a great run of form, some individual skills that you cannot almost defend against but as a team, we have to be compact and aggressive,” Solskjaer added.

Solskjaer said two or three players will be given time to prove their fitness for Sunday’s clash after suffering “knocks and bruises” in the midweek Champions League victory over Atalanta, adding that playmaker Bruno Fernandes is a doubt.

“We’ll give everyone time, we might have the whole squad back fit... Yes, Bruno might be a doubt but he’s doing everything he can to be ready,” Solskjaer said.

The constant criticism that managers endure is worse in Spain than in England, Manchester City boss Pep Guardiola said on Friday in the wake of Steve Bruce’s statement following his sacking by Newcastle United.

Bruce, who was the target of fans’ ire since replacing the popular Rafa Benitez in 2019, left Newcastle by mutual consent on Wednesday, saying it was probably his last managerial role after dealing with abuse and criticism from day one in the job.

“No (it is not worse than Spain and Germany), here it is nicer. In Spain there are more radios, televisions,” Guardiola told reporters ahead of Saturday’s trip to Brighton & Hove Albion.

“You’re treated in terms of results. When you win, ‘what a genius’. When you lose, ‘what a disaster’. Especially with social media, in Spain they are more involved, there are journalists at training sessions, it’s the same but more intense.

“As managers, we are treated worse than the worst. That is sometimes a reflection of society. Nobody deserves to be treated like that.”

Guardiola also sent Bruce his support, saying the 60-year-old should not listen to the criticism levelled at him but instead take heart from the messages of support he received from his players.

Chelsea duo Romelu Lukaku and Timo Werner are set to miss their side’s next two Premier League games after picking up injuries in the midweek Champions League win over Malmo, manager Thomas Tuchel confirmed on Friday.

Both forwards hobbled off in the first half against the Swedish side, with Lukaku’s ankle injury looking particularly bad after he stayed down for as long as four minutes.

“They are out tomorrow (Saturday) and probably the Southampton game and then we will see. What I can tell you for sure is they are both in treatment, positive and not worried but out of the next two games for sure,” Tuchel said ahead of the game against Norwich City.

Midfielder Christian Pulisic will also be unavailable as he continues to recover from an ankle problem.