Kyle Jamieson has made such an immediate impression, it will be difficult to overlook him while selecting the team 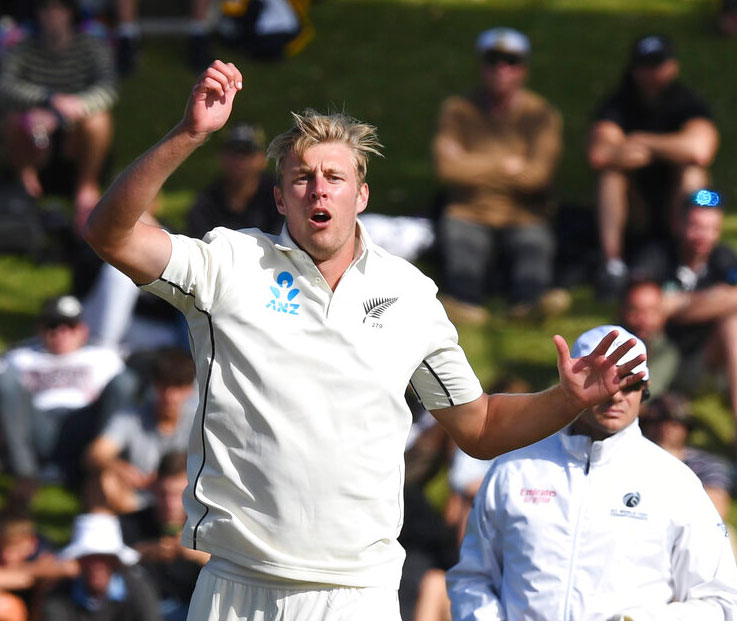 New Zealand’s Kyle Jamieson enjoyed a memorable Test debut in Monday’s 10-wicket win over India at the Basin Reserve and the towering fast bowler promises there is much more to come.

Jamieson, who is 6ft 8 inches tall and gave up basketball in high school to focus on cricket, took four for 39, including the prized wicket of captain Virat Kohli, in India’s first innings total of 165 in the opener of the two-Test series.

Bowling first change behind the experienced pair of Trent Boult and Tim Southee, the blond Jamieson made an immediate impression on batsmen and spectators alike.

An easy, balanced run-up followed by a high, relaxed action prefaced a threatening line and length which forced the batsmen to cover their off stump without being certain how much the ball would move off the seam or leap off the pitch.

He also looked quicker than the 130kmph which the speed gun routinely reported, and on Tuesday, Jamieson said he believed he was capable of rapid improvement in both speed and general performance.

“I’m still a long way off what I want to be as a bowler, with the stuff I’m starting to work on and in the next year or so I’m going to make massive strides,” he said. “Whilst I am very happy with where I’m at now I think there is still a lot more to come.”

The 25-year-old also struck four sixes in an innings of 44 from 45 balls which helped New Zealand secure an eventually decisive first-innings lead after India fought their way back into the contest. His four lofted hits equalled the record for the most sixes in a Test debut innings.

Jamieson was probably not even in the running to make his debut before Neil Wagner withdrew from the squad but his superb display suggests it will now be difficult to overlook him.

Wagner is back for the second Test, from Saturday, after the birth of his first child and there is a possibility that the home team will go in with four specialist seamers in bowling-friendly conditions at the Hagley Oval in Christchurch.

“That’s always good selection dilemma to have as Neil Wagner is coming back. Kyle made most of his debut in the outstanding manner that he played. Neil will be back (in the XI) with us without a doubt,” coach Gary Stead said.

Asked if left-arm spinner Ajaz Patel will be dropped from the XI, Stead didn’t want to spell it out in as many words, even though that’s an imminent possibility.

“We will always consider that (four seamers plus Colin de Grandhomme) as an option after looking at the wicket. I don’t want to make assumptions but yes, wicket at Hagley has a wee bit in it,” he said.

Showing no sign of nerves against India, Jamieson said the quality running through New Zealand’s ranks allowed him to play freely.

“I actually was quite relaxed, I probably surprised myself a little bit over the last couple of weeks of how relaxed I have been,” he remarked. “I guess that is the beauty of coming into this team, there are so many experienced heads and so many good cricketers that I just go out and enjoy myself.

“Day I was pretty clear on what we were to do with the pitch conditions and in that second innings was how we were trying to attack, into the wind, down breeze, what’s the pitch telling us, what’s the batters giving us.”