The deal, which ends decades of legal wrangling, comes days ahead of the 50th anniversary of the tragedy 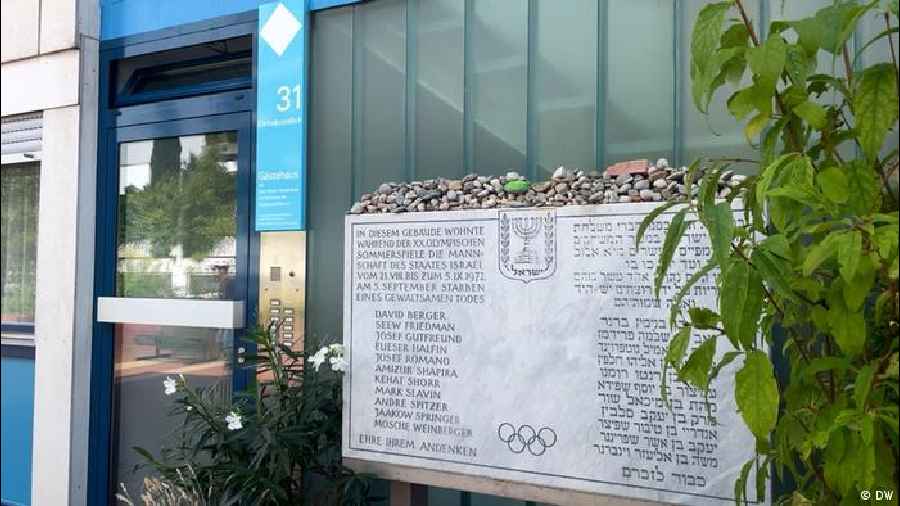 The deal includes the creation of a German-Israeli research commission that will re-examine the events that claimed 11 Israeli lives, as well as compensation paid by the German government, the state of Bavaria and the city of Munich.

"We are pleased and relieved that an agreement on historical clarification, recognition and compensation has been reached shortly before the 50th anniversary,'' the two presidents said.

"The agreement cannot heal all wounds. But it opens a door to each other. With this agreement, the German state acknowledges its responsibility and recognizes the terrible suffering of the murdered and their relatives, which we will commemorate next week.''

President Herzog confirmed that he would travel to Germany for a memorial ceremony on next week's anniversary.

"I want to express my appreciation for this important step by the German government, led by Chancellor (Olaf) Scholz, taking responsibility and making reparations for the historic injustice done to the families of the victims of the Munich massacre," Herzog said.

The Munich massacre was a terrible disaster for Israel, the Olympic spirit and especially the victims' families. I welcome the agreement between the German Government and the families for a historical inquiry, the taking of responsibility by Germany, and suitable compensation.

The agreement, which just days ago looked unlikely to be reached, is an attempt to bring closure to the events of September 5, 1972, when the Summer Olympic Games in Munich took a tragic turn – and led to a bitter 50-year long dispute between the bereaved Israeli families and the German government.

Eight terrorists from the Palestinian group Black September entered the Olympic Village and took 10 members of the Israeli delegation hostage. In exchange for their release, the hostage-takers demanded the release of 234 prisoners held in Israel and West Germany.

Twenty-seven years after the Second World War, the  West German government hoped to use the 1972 Olympics in Munich to present the country and its people in a new, friendlier light. The Israeli delegation competing on German soil was meant to carry a special symbolic value, with some of its members being Holocaust survivors.

As part of this effort to present West Germany in a friendlier light, the police presence was reduced to an absolute minimum. At the time of the attack, just 34 police officers were present at the Olympic Village, with only two of them being armed.

This was despite the fact that it seems West German police had had reason to believe that an attack on the Israeli delegation was being planned. According to a 2012 report by German newsmagazine "Der Spiegel," the terrorists were being assisted by German Neonazis. It said one such meeting between Abu Daoud, the mastermind behind the attack, and a local far-right figure was documented by police in the city of Dortmund. They in turn sent a memo titled "Suspected conspiratorial activity of Palestinian terrorists" to other security authorities in West Germany.

According to "Der Spiegel" this was just one of 17 warnings about a planned attack that Germany's Federal Office for the Protection of the Constitution, one of the country's domestic security services, received prior to the Munich Games.

Another such warning is reported to have been sent by the West German embassy in Beirut in mid-August 1972. It said Palestinian organizations had been "planning an incident during the Olympic Games."

With the warnings unheeded, in the early hours of September 5, the terrorists were able to jump over a fence, enter the Olympic Village building where the Israelis were staying, kill one delegation member and take 10 of them hostage.

After the news of the hostage-taking became known, the Israeli government contacted their West German counterparts, offering to send elite Israeli forces, considered some of the best in the world, to launch an operation to release the hostages. Despite having very little experience with handling such a situation, the West German government declined the Israeli offer.

Only two representatives from Israel's security services were allowed to enter West Germany, one of them being Tzvi Zamir, the then-head of the  Mossad Israeli overseas intelligence agency.

Zamir was only allowed to observe the operation, without taking any active part. According to classified Israeli documents made public in 2012, Zamir was strongly critical of the West German police's operation.

"The Germans didn't even do the absolute minimum to save lives," he told the Israeli government. Zamir also said he had the impression all West Germany cared about was ensuring that the Games continued.

"They didn't attach any value to human lives, neither ours nor theirs," he said.

Under West German law, the army was not allowed to get involved as the attack was considered a "civil matter," resulting in Bavarian police taking charge of the operation to release the hostages, despite having no relevant training.

The snipers who were meant to kill the terrorists at Fürstenfeldbruck Airport, just outside of Munich, were not in radio contact with one another; Despite seeing there were eight terrorists as the group left the Olympic Village, only five snipers were in place, A group of policemen meant to neutralize the terrorists on a plane they thought was set to fly them out to an Arab country, aborted the operation before helicopters bringing the terrorists and the hostages landed at the airport.

As a result of the botched operation 11 Israeli athletes and coaches were killed, along with one West German police officer.

In light of how tragically it all went wrong, the bereaved families — led by widows Ankie Spitzer and Ilana Romano — launched a campaign demanding that the German government look into the chain of events that day.

Over the past five decades, they went from one court to the other; from one German politician to another; from one authority to the other, trying to find answers. They were ignored, often even blamed for "bringing the war to Germany," as Ilana Romano put it in a recent interview with DW.

According to Romano and Spitzer, the families found the handling of their case by the German state to be "humiliating."

"I'll never stop crying my whole life for the misery Germany has put us through in the past 50 years," Ankie Spitzer said prior to the agreement that was reached on Wednesday.

The bereaved families had issued three demands: First, that all of the archive material related to the attack be made public. Second, that the German state take responsibility for the attack and issue an apology. Third, they demanded that Germany pay what they deem "fair" compensation for their pain and suffering.

While the families believed they should be compensated in accordance to the compensation paid to other victims' families of international-level terrorist attacks, Germany had long been only willing to pay a similar level of compensation to that paid to victims of domestic attacks, such as the murder of nine people of migrant background at a shisha bar in the city of Hanau in 2022, which was carried out by a far-right terrorist.

A document seen by DW included details of the latest offer made by the German embassy in Tel Aviv to the families – before the deal was reached. According to the document, German President Steinmeier pledged to "place an even greater emphasis” on Germany's responsibility for the attacks. The document also said Germany will fund a commission of Israeli and German historians to "scrutinize all available sources," in a bid to "create a new scholarly account and assessment of the events" — as was alluded to in Wednesday's joint presidential statement.

According to the document, Germany's offer included payment of €5.4 million ($5.43 million) in addition to the €4.6 million already paid.

The families, however, had demanded $99 million – or almost 20 times the German offer.

The families see the sum of $9 million per Israeli victim as symbolic. Abu Dahoud, one of the Black September terrorists behind the Munich 1972 attack, claimed in his autobiography that Germany had offered him nine million dollars to carry out a plane hijack and demand that the country would release the three terrorists who carried out the attack.

A recent report by Israeli outlet "Yediot Ahronot" cited documents that suggest there may have been a connection between Germany and the terrorists to stage the Lufthansa plane hijack in October 1972, in a bid to prevent further attacks on German soil.

Ulrich Wegener, an aide to German Interior Minister Hans-Dietrich Genscher at the time of the attack, said about the allegations in the 1999 Oscar-winning documentary "One Day In September" that these allegations were "probably true. This was the mentality back then."

According to media reports, Wednesday's agreement includes a total of €28 million in compensation, with around €20 million coming from the German government, and the rest being paid by the State of Bavaria and the city of Munich.

"A huge weight has just been lifted from our shoulders," Ilana Romano told DW about the agreement. "Mostly because this means our children and grandchildren will not have to fight anymore, they'll only have to deal with commemorating the victims, without having to dig into the open wound."

The agreement means the families will now travel to the ceremonies commemorating the 50th anniversary of the attack, and for Romano, travelling to Germany doesn't get any easier.

"Returning to Germany is always hard, more than anything to the Olympic Village, where Yossi (Yossef Romano. -FT) was murdered," she says.