I have some plans, but nothing has been finalised. I will take a call about the XI on match-day morning: Vicuna 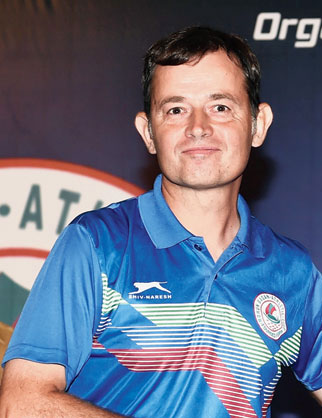 Mohun Bagan did reasonably well in their first I-League match of the season, against Aizawl FC, but failed to score and returned with only a point.

Getting ready for their first home game of the league, against Churchill Brothers at the Kalyani Stadium on Sunday, Bagan are aiming for nothing less than the full points.

Coach Kibu Vicuna, though, isn’t in favour of too much of experiment against Churchill Brothers as he’s likely to start with the same XI that began proceedings versus Aizawl FC.

“I have some plans, but nothing has been finalised. I will take a call about the XI on match-day morning,” Vicuna said on Saturday.

Striker Salva Chamorro is not in a very good form. He didn’t start against Aizawl FC, so his chances of featuring from the start against Churchill Brothers are remote. Julen Colinas and Joseba Beitia were impressive in the previous game and Bagan would again hope that the duo continue with their good work. Daneil Cyrus, Fran Morante and Fran Gonzalez are the three overseas who are likely to get a start.

Taking risks against a side that has won its first match comprehensively by a 3-0 margin is unnecessary. But Vicuna stressed that Bagan would certainly be looking to “impose” themselves on the opposition.

“I have seen Churchill Brothers’ first match. I would say we are tactically ready for the game.

“But yeah, they are physically very strong. They have two central defenders who are very tall and sturdy. They focus on keeping possession of the ball.

“Besides, their two strikers are complimenting each other: one is scoring and the other is providing good support. But we have to handle these aspects. We will try to control the game and impose ourselves on them,” the Spaniard assessed.

For Bagan, their players are creating chances, but conversion remains a problem. Vicuna, however, hopes the team will overcome that against Churchill Brothers.

“Yes, it’s true that we could not convert chances and it was a problem in the first match. We created some chances but did not take advantage.

“But we have trained on this aspect during the week. Hopefully, we can be efficient when it comes to scoring,” Vicuna said. Asked is his team is unable to deal with pressure, Vicuna replied: “We know we are a big team and the supporters’ expectations are very high. But I think we are able to handle the pressure.”

On the other hand, Churchill Brothers are also targeting full points from the game. Their new coach Bernardo Tavares joined the squad four days back and he is not in favour of making too many changes.

“I never played for a draw. If we go for one point, we might lose the game. “I have just joined the squad and want to continue with the impressive showing. I tried to make some technical changes, but those are not major,” Tavares said.

Mapuia scored a brace and captain Willis Plaza netted one for Churchill against Punjab FC. “We started the League well, but we want to continue playing well,” Mapuia said. “I’d like to win my first I-League title for Churchill Brothers now. We are totally focused on that.

“Of course, I want my team to score as many goals as possible… More than last season, hopefully… But I believe that winning the League is more important than personal goals,” he said.