With this win, the Mariners have set up the title clash against League Shield winners Mumbai City FC 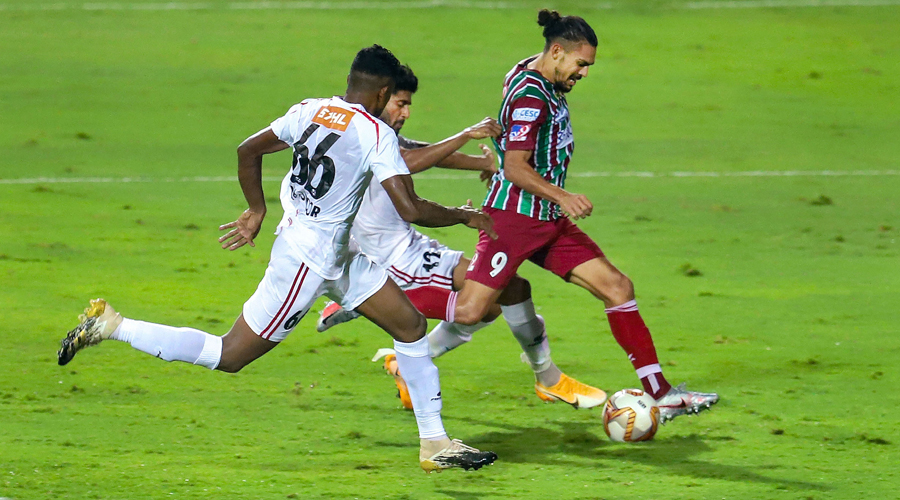 David Joel Williams of ATKMB takes a kick to score a goal during Semi Final 2, 2nd Leg of the 7th season of the Hero Indian Super League between ATK Mohun Bagan and NorthEast United FC, held at the Fatorda Stadium in Goa on Tuesday.
PTI Photo
Our Bureau   |   Calcutta   |   Published 10.03.21, 01:27 AM

A spirited ATK Mohun Bagan overcame the challenge of NorthEast United FC 2-1  (3-2 on aggregate) in the second-leg match of the second semi-final of the Indian Super League (ISL) at the Nehru Stadium in Fatorda on Tuesday and will take on Mumbai City FC in the summit clash on Saturday.

The first-leg match between the two sides had ended in a 1-1 draw.

The result also means that ATK Mohun Bagan have made it to the 2022 AFC Cup qualifying stages by virtue of finishing second in the league and also because they are one of the finalists. Their opponents in the final, Mumbai City FC, had earlier sealed the Asian Champions League (ACL) spot as they ended the league stage as the top ranked team.

Australian striker David Williams (38’) and Manvir Singh (68’) scored for the Antonio Lopez Habas-coached side. VP Suhair (74’) reduced the margin for NEUFC. But NEUFC will rue Luis Machado’s failure to convert a spot-kick in the 83rd minute after ATK Mohun Bagan defender Subhasish Bose had fouled Idrissa Sylla inside the box.

For the first goal, Williams received a through pass from Roy Krishna and then beat the NEUFC defence with pace before slotting the ball home.

After change of ends, though NEUFC looked determined to make their way back into the match, ATK Mohun Bagan piled on more misery on them by adding a second goal from a counter-attack.

After a NEUFC set-piece was cleared by the ATK Mohun Bagan defence, Krishna was quick to initiate an attack from outside his own box. The Fijian played a long ball to Manvir, who got away from the opposition defenders and shot smartly past NEUFC custodian Subhasish Roy Chowdhury.