The winner took three points, with two for the runner-up and one for third place 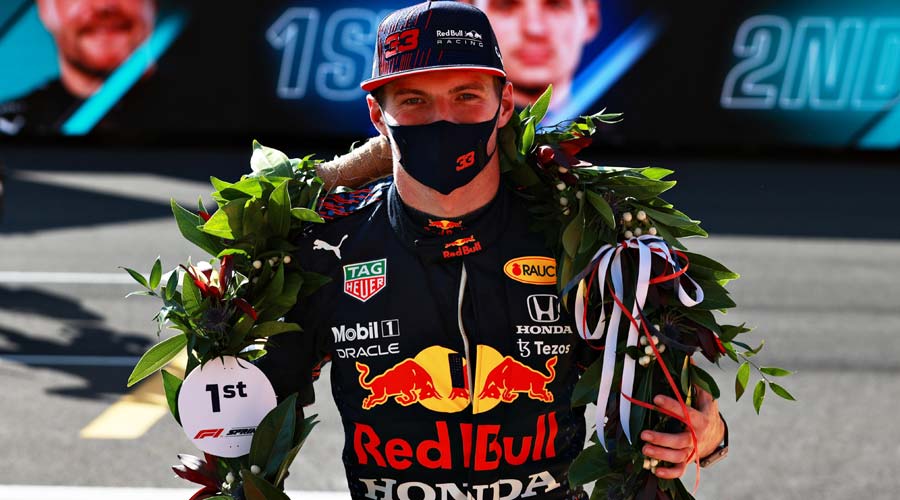 Max Verstappen took pole position for the British Grand Prix and made Formula One history by winning the sport’s first Saturday sprint race to stretch his lead over Lewis Hamilton to 33 points.

Seven times world champion Hamilton will start alongside his Dutch rival in Sunday’s grand prix after finishing second for Mercedes in a 17-lap qualifying race that lasted just over half an hour.

The winner took three points, with two for the runner-up and one for third place.

Hamilton’s teammate Valtteri Bottas finished third in a race aimed at providing more thrills over the three days of track action and potentially shaking up the starting grid.

“We had a good start and a good fight with Lewis on the first lap and then we tried to do our own pace. You could see we were pushing each other hard, because at the end of the race the tyres were blistering a lot,” said Verstappen.

“In the end I'm happy of course to have got those three points -- it sounds a bit funny to then hear you scored a pole position. But anyway we'll take it. It should be a really exciting battle tomorrow.”

The top three were taken by truck for a parade lap around the circuit instead of the usual post-race podium celebrations, with no champagne spraying but the winner was garlanded with an old-style laurel wreath.

The pole was a fourth in a row for Verstappen, who will be chasing his sixth win of the season and fourth in succession on Sunday.

It also ended a Mercedes run of nine poles in a row at Silverstone.

Hamilton had qualified at the front of the grid on Friday, with Verstappen alongside, but lost out at the start and despite a brief wheel to wheel battle it was effectively game over by the end of the lap.

The Red Bull, despite flames flickering from the front left brakes, proved too quick for the Mercedes to catch with a 1.430 second gap to Hamilton at the finish.

“Tomorrow we fight again, but they're just so strong. In the race he was pulling away,” Hamilton told 2009 world champion and former McLaren team mate Jenson Button, conducting the interviews.

“There was nothing I could do to hold onto him so we've really got to try and be in front somehow,” added the Briton, who has won his home race a record seven times, as he waved to tens of thousands of cheering fans on a hot afternoon.

The big casualty of the new format was Verstappen's team mate Sergio Perez, who spun off across the gravel on lap six while in seventh place.

He managed to avoid the barriers and continued before being told by the team to retire.

“We thought there wasn't much to gain (in continuing) so we preferred to retire the car,” said the Mexican, whose team risk seeing their 44-point lead over Mercedes shrink in the constructors' standings.

The big gainer at the start was Alpine's Fernando Alonso, with the twice world champion rocketing from 11th to fifth before eventually finishing seventh.

Britain's George Russell finished ninth for Williams but was later handed a three-place grid drop for causing a collision with Ferrari's Carlos Sainz, who finished 11th.

The penalty moved Alpine's Esteban Ocon up to ninth with Sainz 10th.