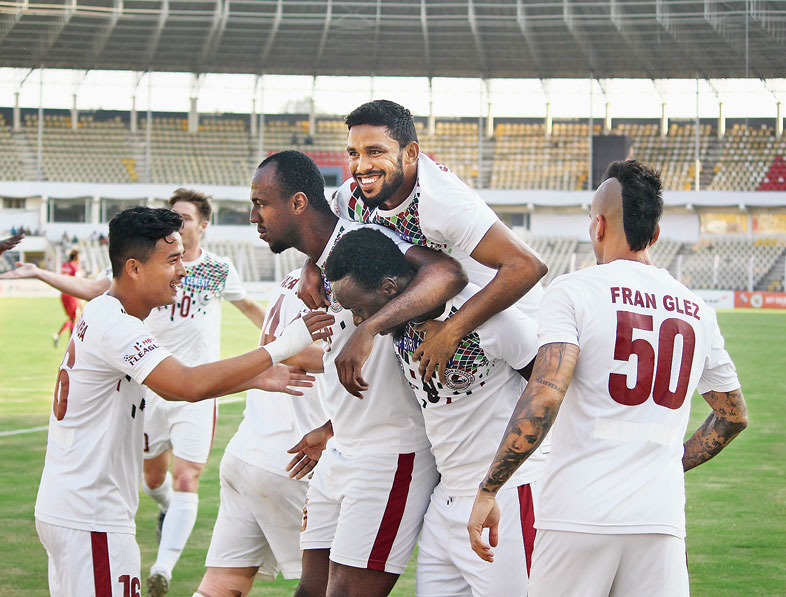 Mohun Bagan overwhelmed Churchill Brothers 3-0 at the Fatorda Stadium in Margao on Saturday and dispelled any doubts of a freeze with the business end of the I-League season approaching fast.

Striker Baba Diawara started the blitz as early as in the sixth minute in this reverse-leg encounter and that was followed by second-half strikes from VP Suhair and Tajik midfielder Komron Tursunov which underlined Bagan’s dominance.

Had Bagan not missed sitters towards the end of the game, the victory margin could have been bigger.

The league leaders were off the blocks early with Diawara scoring his seventh goal in as many games.

The strike also involved Bagan’s Spanish stars, Joseba Beitia and Man of the Match Fran Gonzalez, both of who have been involved in almost every goal Bagan scored this season.

Beitia sent in a free-kick for Gonzalez, who with a header squared it for an on-the-prowl Diawara. The Senegalese tapped it home with the Churchill defence on its heels and it took a couple of deflections including a wrong-footed Sukhdev Patil, for the ball to hobble in.

Churchill Brothers tried to fight back after conceding, but they missed three clear chances in the space of five minutes with the Dawda Cessay-Willis Plaza combination at the heart of two of them.

The Bagan defence, with Trinidadian Daneil Cyrus and Gurjinder Singh at the heart of it after a prolonged break, did well to absorb a determined push from the home team.

Youngster Sk. Sahil, in particular, like he has been throughout the league, was very impressive in his snatching and second-ball play.

After the changeover, Bagan made another move via which Suhair pulled off a stunner. Sahil initiated the move from his own half and found Diawara, who was left unmarked.

Diawara immediately played it on to Suhair, who had markers near him. But he shrugged of his marker with pure strength and drove forward. Once he was into the 18-yard box, Suhair didn’t delay unleashing a right-footer that beat the Churchill Brothers goalkeeper all ends up.

Seven minutes after Suhair’s strike, Gurjinder found himself near Churchill Brothers’ right-corner flag and floated in a cross. It took a meek touch from a defender and looped towards the centre of goal.