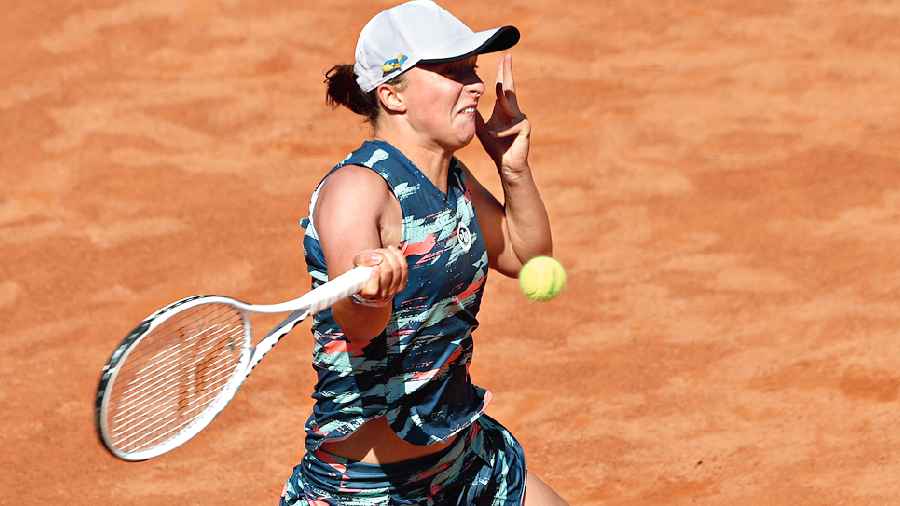 Iga Swiatek in action during the match against Bianca Adreescu at Foro Italico in Rome on Friday.
Getty Images
Our Bureau   |   Published 14.05.22, 02:10 AM

World No.1 Iga Swiatek extended her winning run to 26 matches with a 7-6(2), 6-0 victory over Bianca Andreescu in the quarter-finals of the Italian Open on Friday.

Swiatek, who has put together the longest winning run since Serena Williams

racked up 27 straight victories in 2015, will face Aryna Sabalenka in the semi-finals in Rome.

The 2020 French Open champion is seeking her fifth title this season, having won on hard courts in Doha, Indian Wells, Miami and on clay in Stuttgart.

Swiatek faced a stern challenge in the opening set from 2019 US Open champion Andreescu, who returned to action last month following a six-month mental health hiatus.

Trailing 5-3 and with Swiatek serving for the set, Andreescu broke to stay alive in the contest and forced it to a tie-break, where the Canadian could not keep up with the top-ranked Pole.

Swiatek earned a quick double break to lead 3-0 in the second set before holding her serve and breaking Andreescu once again. The 20-year-old eventually handed Andreescu a second-set bagel, wrapping up the match in one hour and 44 minutes.

Earlier, Belarusian Sabalenka recovered from a set down to notch her first win over Amanda Anisimova in her fifth attempt, beating the American 4-6, 6-3, 6-2.

World No. 3 Alexander Zverev remained on course to claim his first title of the season after overcoming Cristian Garin 7-5, 6-2 to book his place in the semi-finals on Friday.

Zverev, who won the title in Rome in 2017, proved too strong for Garin in the pair’s first meeting since the Chilean upset him on home soil

en route to winning the ATP 250 event in Munich three years ago.

Garin had the first break point of the match at 3-2 but Zverev squirmed his way out of it and broke his 25-year-old opponent to take a 4-3 lead and, after some poor shot selection, closed out a gritty opening set.

Zverev comfortably won the second set after Garin dropped serve in his first game, converting two out of his seven break points to wrap up the victory.

“I think it was a high level match, at times it wasn’t pretty tennis but I got the job done and that’s the most important thing,” said Zverev, who is yet to drop a set in Rome.

The German will face Stefanos Tsitsipas, who defeated home favourite Jannik Sinner 7-6(5), 6-2 for a place in the final.