Quinton de Kock (40) and Suryakumar Yadav (51), who has been sensational this season, got Mumbai going with their flurry of strokes 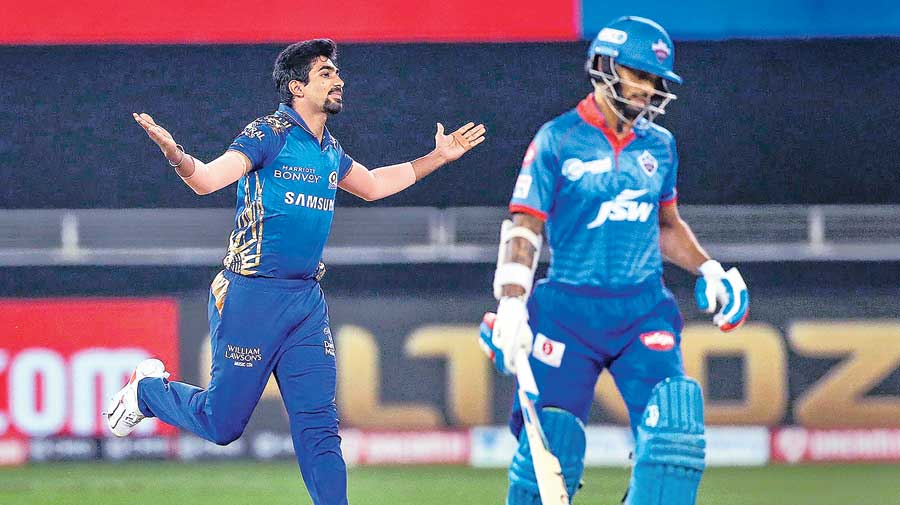 Man of the Match Jasprit Bumrah celebrates after taking the wicket of Delhi Capitals’ Shikhar Dhawan in Dubai.
PTI
Our Bureau And Agencies   |   Calcutta, Dubai   |   Published 06.11.20, 02:38 AM

Without Trent Boult and Jasprit Bumrah, Mumbai Indians had lost the last match by 10 wickets; with Boult and Bumrah back, they reduced the opposition to 0/3 inside the first two overs — that’s how important “B & B” are for the defending champions.

Mumbai comfortably reached their sixth IPL final with a 57-run win after batting superbly to put up 200/5 in 20 overs.

The Capitals eventually managed just 143/8 as Mumbai cakewalked through Qualifier 1 at the Dubai International Stadium on Thursday. 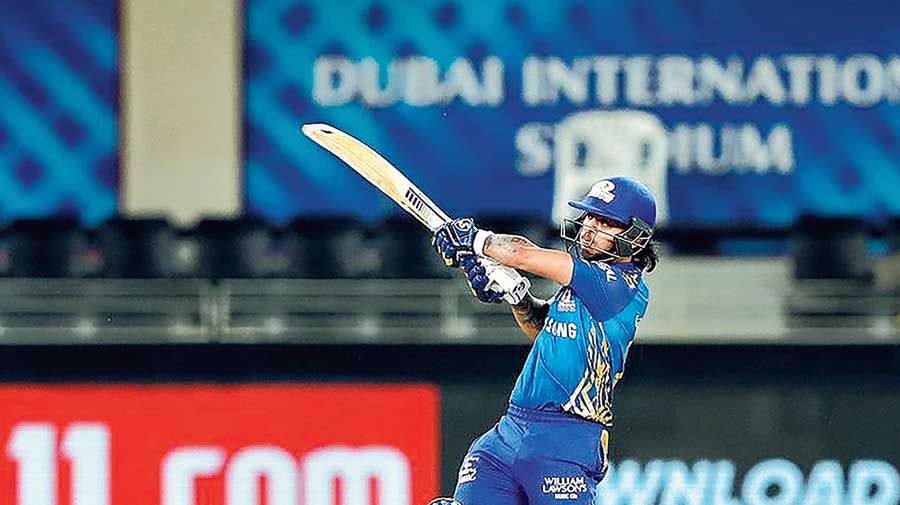 Put in to bat on a pitch that looked good for batting, Mumbai again lost their captain, Rohit Sharma, early. He fell to Ravichandran Ashwin (3/29) off the very first ball he faced. But Quinton de Kock (40) and Suryakumar Yadav (51), who has been sensational this season, got Mumbai going with their flurry of strokes.

At the halfway stage, even though Ashwin had struck again to remove De Kock, Mumbai were well placed on 93/2.

Capitals came back really well then with Anrich Nortje dismissing Suryakumar and Ashwin picking up his third when the dangerous Kieron Pollard holed out at the deep, lasting just two balls. Mumbai had lost two wickets for just one run with the scoring rate also down to just above eight.

However, the impressive Ishan Kishan (55 not out off 30 balls) was firm at the other end. Kishan and Hardik Pandya (37 not out off 14 balls) hammered an unbroken stand of 60 off just 23 balls that helped their team touch the morale-boosting 200-run mark.

Thanks to Kishan and Pandya, the momentum had swung drastically in Mumbai’s favour. And then Boult (2/9) and Bumrah (4/14) made superb use of the new ball to destroy Capitals, inflicting blows that were too heavy to recover from.

Just a hint of swing was good enough for Boult to rattle the struggling Prithvi Shaw before he trapped Ajinkya Rahane leg-before with sharp inward movement. Worse was to follow for the Capitals when, in the second over of their run chase, Bumrah bowled a yorker to castle Shikhar Dhawan, who could have played it better. All three batsmen were out for ducks.

As if 0/3 weren’t enough, Bumrah got his second when captain Shreyas Iyer couldn’t clear Rohit at extra cover. From 20/4 in the fourth over, the Capitals were left with too much to do.

Iyer had elected to field hoping that batting would be easy in the second half because of the dew factor. But Boult and Bumrah took all factors out of the equation.

Marcus Stoinis (65) and Axar Patel (42) resisted briefly during their sixth-wicket partnership. But Bumrah returned to knock over the Aussie all-rounder.