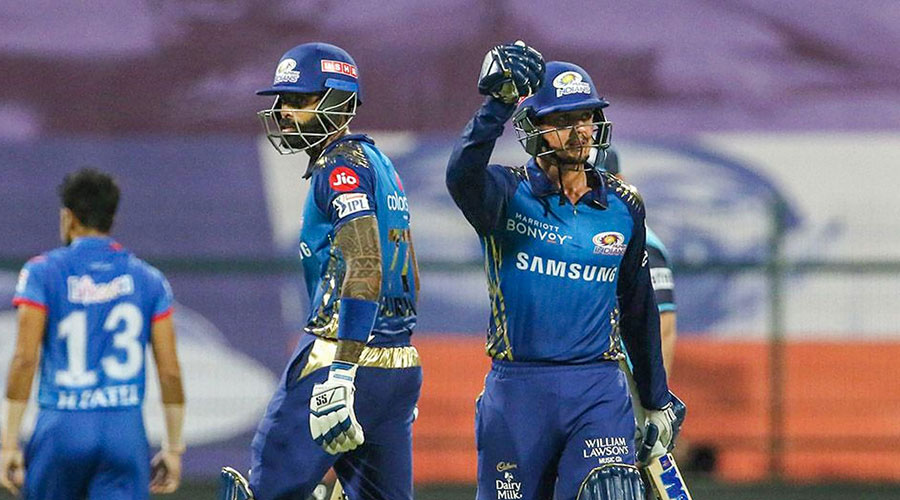 Mumbai Indians had the last laugh in the battle of table toppers at the Sheikh Zayed Stadium on Sunday.

Rohit Sharma’s boys were calculative with their game plan and held their nerves right through to complete a five-wicket victory over Delhi Capitals. The win helped the four-time champions leapfrog the Capitals to the top spot in the standings. Mumbai Indians have a superior net run rate than the Capitals although both teams have 10 points each.

The game was played on the same pitch used for Saturday’s Kolkata Knight Riders-Kings XI Punjab match, so stroke play expectedly wasn’t really easy. Thanks to Shikhar Dhawan’s unbeaten 69 and captain Shreyas Iyer’s 42, the Capitals could post 162/4 after winning the toss and opting to bat first.

The chase was never going to be easy for Mumbai Indians despite their power-packed batting line-up. Apart from the tricky pitch, the Capitals had a good bowling attack as well.

The Capitals bowlers still tried to make a match of it when Kagiso Rabada (2/28) and Marcus Stonis got rid of Suryakumar and Hardik Pandya, respectively, in quick succession. But young Ishan Kishan (28 off 15 balls) once again showed maturity, rotating the strike and churning out big hits in between that made the equation more favourable for Mumbai Indians.

Rabada and Anrich Nortje, though, were yet to give up. Rabada first had Kishan caught in the deep with Mumbai Indians needing 11 more off 15 balls, and then Nortje bowled an impeccable line and length against Kieron Pollard, conceding only three in the penultimate over to create some pressure on the opposition.

However, with seven needed off the final over, Krunal Pandya and Kieron Pollard kept calm against Stoinis, taking Mumbai Indians home with two balls to spare.

Much of the credit for Mumbai Indians’ win would go to De Kock and Suryakumar. While De Kock’s knock was more about improvisation, that of Suryakumar, who registered his second successive fifty in a winning cause, relied more on timing and grace.

He did get a reprieve when on 17 as Ravichandran Ashwin grassed a chance off his own bowling.

The Capitals were below par in the outfield, with Prithvi Shaw misfielding and giving away two extra runs to Suryakumar and even parrying a ball over the ropes to gift Kishan with a maximum in the death overs.

The way Suryakumar batted in the middle overs with Kishan giving him the necessary support ensured the Capitals spinners weren’t that effective either.