Hyderabad’s only other win till now this season was on April 21, against Punjab Kings 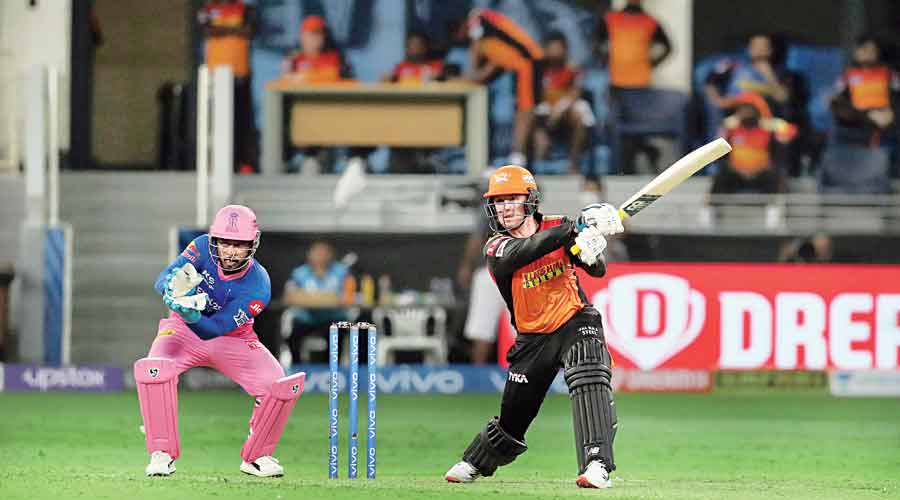 Jason Roy (60 off 42 balls) produced an innings of substance in his maiden IPL appearance this season, setting the tone for Sunrisers Hyderabad’s clinical seven-wicket win over Rajasthan Royals at the Dubai International Stadium on Monday.

Alongside Roy, skipper Kane Williamson (51 not out) too came up with a vital contribution and, more importantly, stayed till the end, ensuring the Sunrisers broke their losing streak. Williamson, who recorded his second half-century of this IPL, hit Chetan Sakariya for two consecutive fours to help his team overhaul the Royals’ par score of 164/5 comfortably with nine balls to spare.

Sunrisers’ only other win till now this season was on April 21, against Punjab Kings.

The Sunrisers’ chances of making the play-offs suffered a jolt after Punjab Kings beat them the other evening. But this win certainly gives them something to cheer for, while it also makes the situation a lot tighter for the Royals who are sixth now in the standings.

Had Sanju Samson and his men beaten the Sunrisers, they would have moved up to fourth in the table with 10 points, thereby aggravating the headache for Kolkata Knight Riders, Punjab and the second-from-bottom Mumbai Indians, all of whom are locked on eight points.

Why the Sunrisers team management persisted with the struggling David Warner and benched Roy in the preceding matches was baffling. Nonetheless, as soon as Roy replaced the former captain, he responded brilliantly with his trademark cuts, drives and pulls to put the rival bowlers under pressure right from the onset.

The England limited-overs opener was assisted well by Wriddhiman Saha at the top as the duo hammered 57 off the first five overs of the Sunrisers’ run chase.

Roy departed only after stitching another crucial 57-run stand with Williamson for the second wicket that left the Sunrisers with only 51 to get from nine overs. Young Abhishek Sharma (unbeaten on 21) too deserves a pat for not doing anything silly that could have spoiled the efforts of Roy and Williamson.

The innings of Royals captain Samson, currently the top run-getter (433) in this edition, was no less noteworthy than those of Roy and Williamson. But there was no one at the other end to complement his acceleration at the death.