The Knight Riders cement their No. 4 position in the standings as they now have 12 points in their kitty 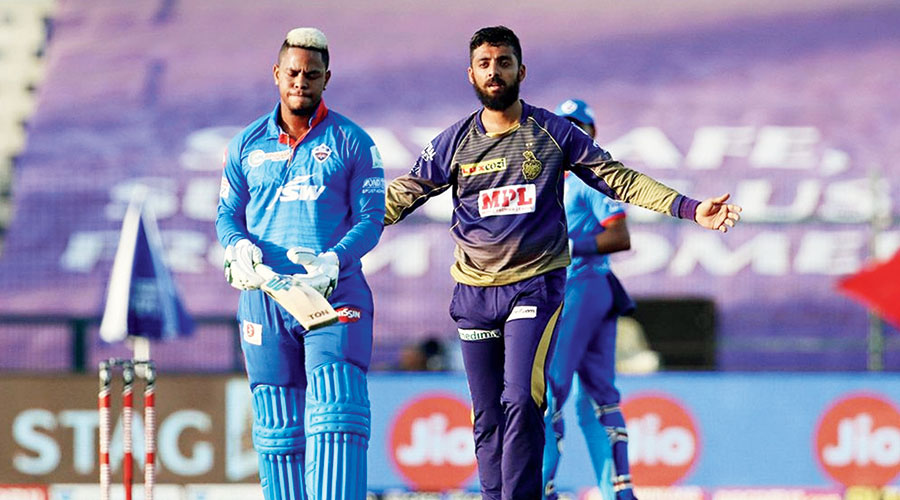 Having got his bowling action cleared, Sunil Narine was quick to make an impact but with the bat, while Pat Cummins and Varun Chakravarthy shone with the ball as Kolkata Knight Riders outplayed Delhi Capitals by 59 runs at the Sheikh Zayed Stadium on Saturday.

Along with Narine (64), Nitish Rana, who lost his father-in-law recently, hit a superb 81 after being promoted to open the innings as the duo’s 115-run stand for the fourth wicket enabled KKR to overcome yet another scrappy start to post a formidable 194 for 6.

Then, Cummins’ (3/17) early strikes — Ajinkya Rahane and the in-form Shikhar Dhawan within the first three overs of the Capitals’ innings — came as a massive blow to Delhi Capitals before leg-spinner Chakravarthy (5/20) cleaned up the middle order.

Chakravarthy accounted for Rishabh Pant, Shimron Hetmyer, skipper Shreyas Iyer, Marcus Stoinis and Axar Patel — picking up all those who could have been more than a handful at the death — to restrict the Capitals reply to a paltry 135 for 9.

Thanks to this comprehensive win, the Knights cement their No. 4 position in the standings as they now have 12 points in their kitty.

Not just in terms of their position in the points table, but after a horrendous show versus Royal Challengers Bangalore in their previous game, there was every possibility of that heavy defeat severely denting the team morale. In that perspective, this victory should serve as a major confidence booster to Morgan and Co.

Besides, the team management deserves the accolades for backing Narine, who replaced Tom Banton, in his comeback game. Coming in at a hopeless position of 42 for three in the eighth over, Narine struck six fours and four sixes.

His carefree and spontaneous batting instilled some much-needed confidence in Rana, who stared helplessly from the other end when Shubman Gill, Rahul Tripathi and ex-captain Dinesh Karthik tamely surrendered to Anrich Nortje and Kagiso Rabada. But watching Narine take on the Capitals bowlers, he too chanced his arms and used the long handle to good effect, finishing with 13 fours and a six.

Rana and Narine targeted mainly off-spinner Ravichandran Ashwin, whose three overs went for as many as 45, while Stoinis and Tushar Deshpande too were expensive.

For the Capitals, this performance with the bat also reflects the bit of work they need to do as far as their middle-order batting is concerned. They do remain second in spite of this crushing defeat, but if problems persist in their middle order, it could hurt them badly going forward.