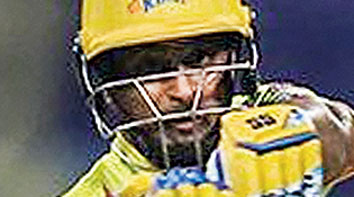 In what has been a fiercely contested IPL so far, Chennai Super Kings have looked a bit rusty, having lost two of their three games so far. In fact, the multiple-time champions, considered the most consistent team in the IPL universe, currently occupy the last position on the points table.

They will be desperate to set their course right on Friday when they take on Sunrisers Hyderabad.

There’s some good news for an under-pressure Mahendra Singh Dhoni. Ambati Rayudu and Dwayne Bravo, both strong performers, will be available for selection having recovered from their respective injuries.

Rayudu was instrumental in the Super Kings’ victory over Mumbai Indians in the tournament opener, but missed the next couple of matches with a hamstring injury. With Dhoni’s batting line-up looking a bit shaky at times, Rayudu’s return will give them hope. And he is likely to come into the side in place of an out-of-form Murali Vijay.

Bravo, a T20 stalwart from the Caribbean, is yet to play in this IPL as he was carrying a niggle. But while his availability is a positive development, to include him in the playing XI Dhoni will have to put his thinking cap on. That is because Bravo’s replacement, young English all-rounder Sam Curran, has been a top performer so far.

The Sunrisers, on the other hand, recorded their first win of IPL 2020 in their last match, getting better of the formidable Delhi Capitals.

The David Warner-led Sunrisers looked a better team with the inclusion of Kane Williamson in the XI. But how much they succeed will depend on the high power opening pair of Warner and Jonny Bairstow, who are yet to fire in unison.

In the bowling department, Sunrisers depend heavily on Afghan spinner Rashid Khan, who had a brilliant outing

in their last match. Left-arm pacer T. Natarajan’s performance was also very impressive but it needs to be seen if he can be consistent.