The Knights will definitely fancy their chances, notwithstanding their opponents’ record and fiery pace attack 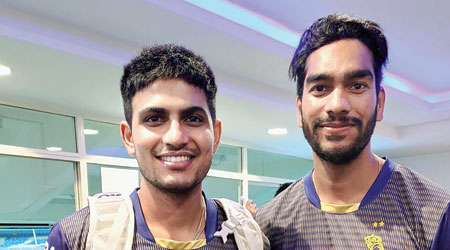 KKR openers Shubman Gill and Venkatesh Iyer after their win over RCB in Sharjah on Monday
Pictures courtesy: Twitter
Our Bureau   |   Calcutta   |   Published 13.10.21, 12:56 AM

Kolkata Knight Riders have been on a dream run since the UAE leg of the IPL began. Their top-order has scored consistently, their spinners have stifled the opposition on sluggish tracks and their fielding has been top class. With six wins in the last eight matches, they have now reached Qualifier 2, one step away from the final.

Delhi Capitals, on the other hand, have been the most consistent IPL side in recent years, qualifying for the playoffs in each of the last three editions. They failed in their first big test when they lost to Chennai Super Kings in Qualifier 1.

KKR will no doubt take confidence from their victory against Royal Challengers Bangalore in Monday’s Eliminator that dashed Virat Kohli’s hopes of winning an IPL title. If the emphasis is on momentum and peaking at the right time, then the Knights will definitely fancy their chances, notwithstanding their opponents’ record and fiery pace attack.

“I think (in) the first phase of the tournament, we were trying to implement Baz’s (head coach Brendon McCullum) mantra of trying to play positive, aggressive cricket, a brand of cricket that our fans really enjoy watching and also players really enjoy playing,” captain Eoin Morgan said.

“In that first phase it didn’t quite happen, throughout different games we showed glimpses of it, but throughout this whole second phase, people have turned out for different motivation and drive to try and play that aggressive brand of cricket.

“Our bowlers have shown us the way (on) how to be aggressive with the ball and in trying to take wickets and identifying when to hold back and be a little more defensive and that’s led the way with our batting as well,” Morgan added.

Knight Riders captain lavished praise on all-rounder Sunil Narine, who played a vital role in the team’s win over RCB.

“I think he was outstanding ... Both with the bat and the ball, his impact in the game was huge. He changed momentum when he went out to bat and swung that completely in our favour after the platform the guys had laid (at) the top of the order,” Morgan said.

Man of the Match Sunil Narine inside the dressing room.
Pictures courtesy: Twitter

The chasing teams have won five out of seven games in Sharjah so far. Four of Delhi Capitals’ five losses this season have come while batting first, while Knight Riders have won on all five occasions when chasing in the UAE. So it will not be a surprise if both teams are looking to bowl first.

Andre Russell is still recovering from his hamstring injury but Knight Riders could keep him out given the slow nature of the Sharjah wicket. According to West Indies coach Phil Simmons, Russell has been batting in the Knight Riders nets and is “running at a certain level”.

If Knight Riders go unchanged, they will have five left-hand batters in the top eight. That should work in Ravichandran Ashwin’s favour but how he bowls if tried in the Powerplay overs could decide the course of the match.

It won’t be a surprise if Knight Riders once again promote Narine up the batting order. In T20 cricket, Narine has a strike rate of 287.5 against Ashwin and 187.5 against Axar Patel. Neither bowler has been able to dismiss him in a combined 29 balls.

The Capitals could try out Anrich Nortje at the death instead of Kagiso Rabada. Rabada has a death-overs economy of 10.84 in this season, whereas Nortje has gone for only 6.81 per over. It remains to be seen if Marcus Stoinis will be available on Wednesday.

Then there is speedster Avesh Khan, who has taken 23 wickets so far this season, and he will back himself to add to his tally against Knight Riders.

The Capitals have posted five wins in the UAE leg of the tournament but one of their defeats here has come against Knight Riders, and what better opportunity for them to exact revenge than in the IPL playoffs.

But that will be easier said than done. On a pitch offering turn, the spin duo of Varun Chakravarthy (16 wickets so far) and Narine will look to stifle the formidable Delhi batting line-up.