In Kashmir’s den, a Bagan masterclass

Robertson blames ‘5 minutes of madness’ for loss at home 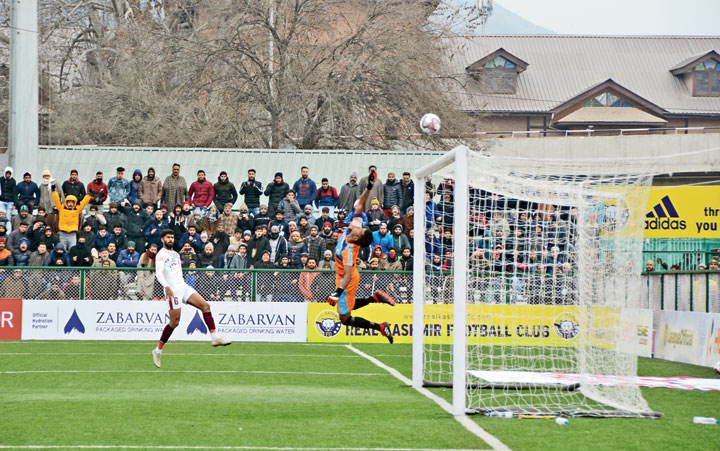 There is this billboard in one corner of the Tourist Recreation Centre Ground in Srinagar. Real Kashmir FC’s Scottish coach David Robertson looks at you. And below it’s written, “In our den, we decide your moves.”

Well, on Sunday, from 11.30am till the final whistle it was Mohun Bagan who decided Real Kashmir’s moves.

Take a bow Bagan. You gave a display of guts and gumption against a team which is always a difficult proposition in its own den.

Bagan’s 2-0 victory over Real Kashmir would remain as one of their memorable away performances in the I-League. May be the 1-1 draw against Bengaluru FC on the last day of May 2015 would come first. After all that gave their only I-League title till date. But this match would be a close second.

More than 11,500 spectators turned up at the ground to watch the match and they enjoyed every bit of it. The first goal came in the 71st minute when Joseba Beitia, clearly the standout performer of the day, slammed home from inside the box.

Very few at the ground would agree with Robertson. For, throughout the match it was Bagan who dictated terms. They are now on top of the I-league table with 10 points from five matches and it was their third win on the trot.

In the build-up to the game, Bagan were very jittery. The bone-chilling cold, the artificial turf, practice timings and zero net connectivity were irritating them. Real Kashmir had a good chance of recording their second home win in as many matches. But when the day arrived, Bagan coach Kibu Vicuna and his brave men sent out a loud message. “Ignore us at your own peril.”

This victory will definitely shape Bagan’s I-League campaign this season. Everyone played his role to perfection. Ashutosh Mehta on the right, Dhanachandra Singh on the left, central defenders Fran Morantes and Daniel Cyrus, young Sheikh Sahil in the midfield and even Baba Diawara upfront.

The diminutive Shankar Roy at the goal was courageous when it came to dealing with the aerial crosses sent in by Real Kashmir. In fact, minutes before the goal, Shankar leapt high on his left to punch away a Mason Robertson header which had goal written on it.

But the real star was Beitia. He had a problem with his new pair of boots but those things didn’t deter him. Masterminding every move, Beitia made life difficult for Real Kashmir.

And when Real Kashmir went all out for a goal in the latter stages of the match, Diawara tracked back to help the defence. “Given the fact that it was his first match and coming from an injury lay-off, Baba’s performance was very good,” was how Vicuna rated the Senegalese frontliner’s first day first show.

Diawara though could have scored in the very first minute when he headed straight to Real Kashmir goalkeeper Purba Tempa Lachenpa from inside the six-yard box. He needs more time but once he settles down, Bagan will have an ace up their sleeve. There is no doubt about that. Such was Bagan’s domination in the first 45 minutes that a 3-0 scoreline before the change ends would not have looked unreal.

Real Kashmir upped the ante after the change of ends and Danish Farooq found Bazie Armand inside the box who shot it over.

Now about the goals.

A long throw-in from Dhanachandra Singh was given a touch by Cyrus and Beitia volleyed it home. Three minutes later it was Naorem’s turn. The midfielder was often chided by Vicuna for being too self-centred but on Sunday he made his coach happy. Britto’s low cross from the right was met with a first-time volley by Naorem.

“A very satisfying performance in trying conditions,” said Spaniard Kibu, who could not stop smiling at the post-match media conference. “We will sleep well tonight,” he added.

True. They deserve a good sleep after such a wonderful performance.