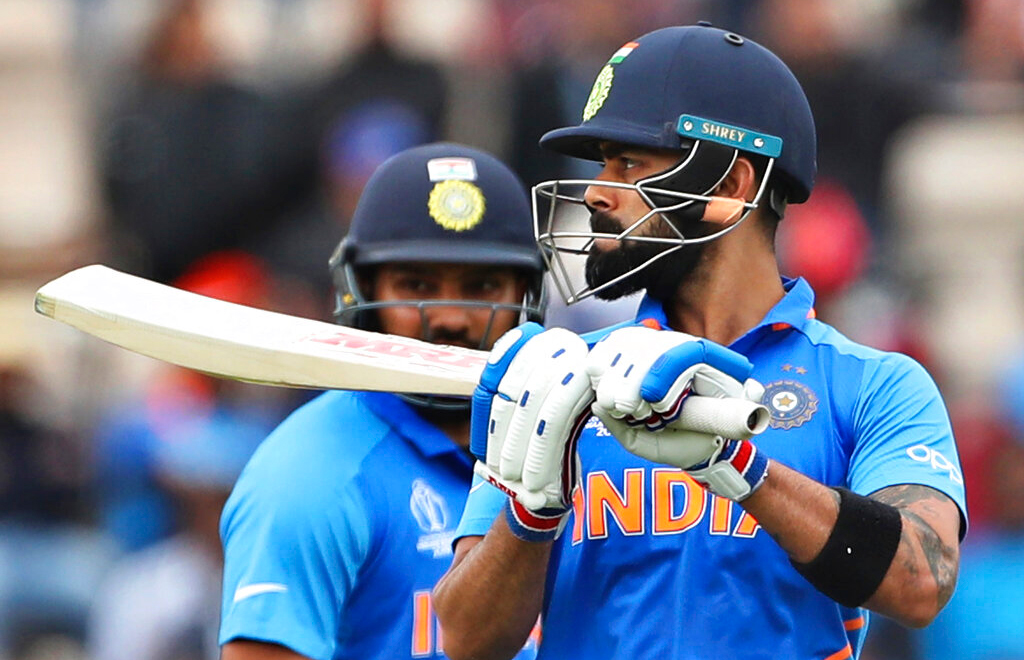 Indian fans were in for a treat as India won by 6 wickets in their World Cup opening match against South Africa. Vice-captain Rohit Sharma was unbeaten at 122. So safe to say that his unbeaten score helped India chase down a 228-run target in 47.3 overs.

Indian captain Virat Kohli made only 18 runs but was full of praise for Rohit Sharma and other supporting batsmen.

The World Cup had some pretty dramatic moments with Bangladesh defeating South Africa and Pakistan defeating England in their respective matches.

India played two practice games ahead of the World Cup with the last one taking place on May 29 against Bangladesh.

India suffered a disappointing loss against New Zealand in the first practice match, but enjoyed a 95-run win against Bangladesh in the second warm-up match.

South Africa's batting and bowling were inadequate in the first two games, but surprisingly, their fielding has been below par too. Towards the end of the match, David Miller even put down a regulation skier from Rohit Sharma. South Africa have now registered three consecutive losses in the World Cup.

After the victory, Indian Twitter erupted in an outburst of congratulatory messages, fist-bumps and jokes. Former cricketers, and cricket commentators could hardly contain their glee at the clinical performance from the men in blue:

Not the first time that we have seen Rohit take up the mantle to win the game game on his own when Virat gets out early. India so fortunate to have such batsmen.👏👏👏🙏🙏🙏#INDvSA #ICCCWC2019

Wonderful result for India. Many boxes ticked. Bumrah was magnificent as was Chahal and India will like the solidity from Rahul and Dhoni. And Rohit Sharma was unhurried, his slowest odi century but one that was invaluable

A wonderful, mature innings from Rohit Sharma. Great assessment of the situation and seeing India through to the win in the end, a hallmark of top players @ImRo45 . A well begun World Cup campaign for Team India #INDvSA pic.twitter.com/Hmul57c4BO

23 days ago some mercy and amazing gesture for DeKock, but today no mercy . Jasprit
Bumrah, what a spell #INDvSA pic.twitter.com/I1nvvkHC8u

A great game of cricket played by #TeamIndia.@yuzi_chahal and @Jaspritbumrah93 bowled exceptionally well and gave 🇮🇳 a perfect start.
It was lovely to see @ImRo45 play a mature innings and stay till the end and get us home.#INDvSA #CWC19 #MatchDekhaKya pic.twitter.com/006sOK4J1X

But what is Twitter without a few jokes. Some used Rohit's Herculean effort to mock arch-rival Pakistan's low score in their opener against New Zealand, while others roasted an uncharacteristically bad South African fielding effort:

I went to SBI thrice in last 7 days but couldn't open my account. I feel like South Africa. #INDvSA

South Africa is lucky they scored only 227. Denied Rohit Sharma the opportunity to score yet another double ton. #INDvSA #Hitman #CWC19

Some helpful Twitter users were kind enough to point out statistical tidbits and career milesones:

50th ODI win for Virat Kohli as captain and he is the quickest among all captains from the subcontinent to do so, taking only 69 matches.#CWC19 #SAvIND #INDvSA

He is the 2nd wicket keeper to reach this after Sangakkara#DhoniAtCWC19 #INDvSA #CWC19 pic.twitter.com/n4kkVFJgkM

Turns out even politicians are not immune to cricket fever. From a former BJP president to the current defence minister, politicans also took to twitter to congratulate the men in blue:

Congratulations to Team #India for a superb start. 🇮🇳

My best wishes to “Men In Blue” for #WorldCup2019 #INDvSA

Congratulations #RohitSharma @ImRo45 for the fantastic unbeaten century and #TeamIndia for 1st win in @cricketworldcup !
All the best for the next ones !#INDvSA #SAvIND @BCCI

Congratulations #TeamIndia for beginning #CWC19 journey today with a splendid win against South Africa. Congrats @ImRo45 for a splendid century.

Best wishes to the entire Indian team led by @imVkohli for success in the remaing part of the tournament too.
#INDvSA pic.twitter.com/ZT8DM4rphC

Well begun is half done! Congratulations to #TeamIndia for the superb victory against South Africa in #CWC2019

In this match we witnessed some memorable performances by @yuzi_chahal, @Jaspritbumrah93 & @ImRo45. Overall it was a solid teamwork.

Best wishes for the games ahead.