Hat-trick of assists by Messi 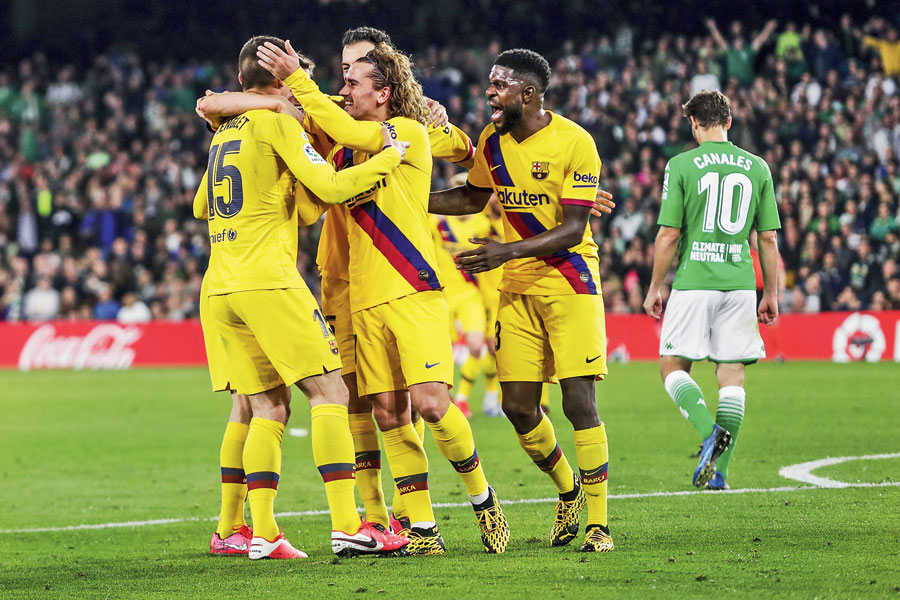 Lionel Messi gave a hat-trick of assists as Barcelona ended their turbulent week with a thrilling 3-2 victory over Real Betis to stay in touch with Real Madrid at the top of La Liga.

Madrid’s 4-1 win at Osasuna earlier on Sunday put pressure on Barcelona to respond, only for Betis to twice lead at the Benito Villamarin through a penalty from Sergio Canales and brilliant solo effort from Nabil Fekir.

Yet both times Barcelona hit back as Frenkie de Jong and Sergio Busquets pulled them level before Clement Lenglet headed in with 18 minutes left — all three goals teed up by Messi.

Fekir and Lenglet were then sent off in a frantic contest by the end of which Barcelona had the victory they so desperately needed following a difficult few days.

Messi had put himself at the heart of a political spat this week by publicly taking exception to comments made by sporting director Eric Abidal, who suggested the players were the cause of the decision to sack Ernesto Valverde last month.

Barcelona were then beaten by Athletic Bilbao and knocked out of the Copa del Rey before the semi-finals for the first time in 10 years on Thursday.

“In Bilbao we played well but they knocked us out,” said Barca coach Quique Setien. “This win will give us motivation and extra energy for the future. This is a hugely significant win for us because Betis are a great team and were being roared on by their fans at home. This is a very important victory because it keeps us near the top of the table and it will give us a huge psychological boost,” Setien added.

“It was so important for us to win after losing in the Cup in the last minute but we just had to keep playing in the same way and that’s what we did,” added Sergi Roberto.

“It was vital that we found our form and started winning away from home again so we go home feeling happy.”

Ousmane Dembele suffered another hamstring injury, which is likely to keep him out for the rest of the season, while Samuel Umtiti appeared in court too, for alleged damages to a rented villa.

It meant defeat against Betis was unthinkable, particularly for Setien, who could ill-afford another setback against the team he managed for two years between 2017 and 2019.

Instead, Barca turned the tide, with a chaotic performance that might have been punished by better opponents, but that keeps them three points behind Real Madrid, who had earlier won at a canter in Pamplona.