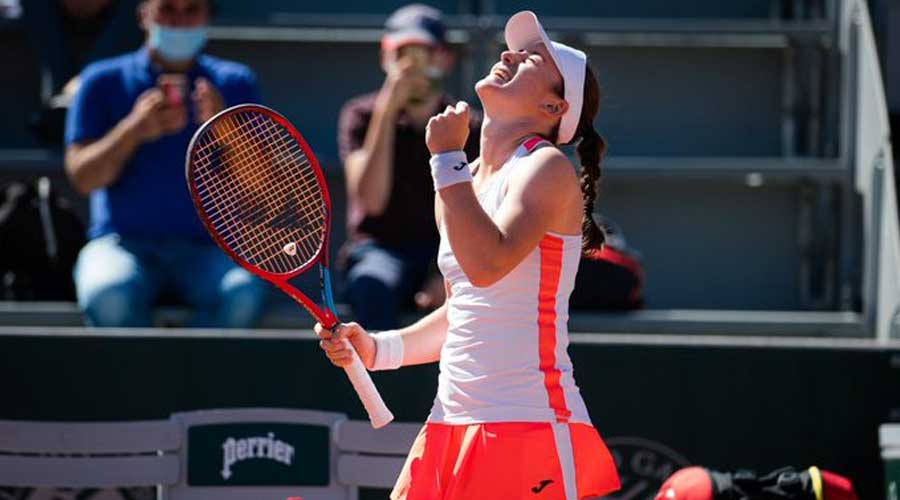 Before the French Open, Tamara Zidansek had never advanced past the second round at any Grand Slam.

The former snowboarder has now become the first woman from Slovenia to reach the semifinals at a major tournament.

Spurred on by the vocal support of her coaching team on Court Philippe Chatrier, the 85th-ranked Zidansek defeated Spanish rival Paula Badosa 7-5, 4-6, 8-6 Tuesday at the clay-court tournament.

"It feels overwhelming," she said.

The French Open is the only remaining Grand Slam where tiebreakers are not played in the last set. Wimbledon recently installed tiebreakers at 12-12 in the final set.

After splitting the first two sets, Badosa violently threw her racket in anger at the changeover after Zidansek held for a 6-5 lead in the third. She regained her composure but Zidansek then saved three break points to take a 7-6 lead and converted her second match point with a big forehand in the next game.

Zidansek, a three-time national junior snowboarding champion in Slovenia, will face either Elena Rybakina or Anastasia Pavlyuchenkova for a spot in the final at Roland Garros.

In perfect weather conditions, both players pulled off some spectacular winners but also hit a lot of unforced errors. Badosa, who was among the six women in the quarterfinals at a major for the first time, said she was too nervous.

"I didn't feel myself in the whole match," she said. I'm a little bit sad about that, because I think I played maybe the worst match of the tournament and of the clay season, but sometimes it's like that."

Badosa applied pressure from the start with a flurry deep groundstrokes from the baseline. The strategy worked as Zidansek dropped her first service game and then trailed 3-0. But an error-strewn game from Badosa gave her rival a break and a boost.

Zidansek started to return better and went for her shots, linking attacks with bold moves at the net to even the score at 3-3. Badosa saved a set point in the 12th game with a forehand attack but could not fend off the second as her poor drop shot ended up in the net.

Badosa trailed 4-2 in the second set after a series of unforced errors but Zidansek could not build on the momentum and struggled with her serve, too.

The Spaniard rallied, made the decisive break in the ninth game at love and sealed the set with a big forehand.

The 23-year-old Zidansek opened this year's tournament by upsetting seventh-seeded Bianca Andreescu in the first round for her first career win over a top-10 player. In that match, she was two points from defeat in both the second and third sets.