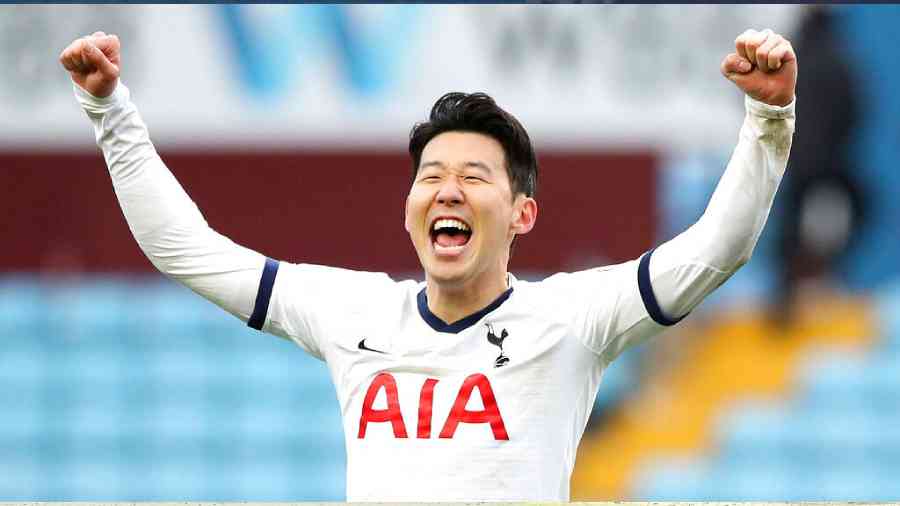 Both Tottenham and Manchester City, who defeated Wolverhampton Wanderers 3-0 away, are on 17 points from seven matches.

The defending champions have a better goal difference.

Rodrigo Bentancur’s first goal for Tottenham was separating the sides in an entertaining tussle but Son, who started on the bench, exploded back to form with three goals in 13 minutes.

Leicester took an early lead with a twice-taken penalty by Youri Tielemans but Tottenham hit back quickly with Harry Kane powering in a header at the far post.

Tottenham went ahead in the 21st minute as defender Eric Dier marked his return to the England squad with a glancing header from a corner.

Bottom-placed Leicester were lively in attack though and James Maddison’s superb finish sent them in level at half-time.

Bentancur seized on a mistake to restore Tottenham’s lead in the 47th minute but Son went on to steal the show.

Son then completed his hat-trick after running on to a Pierre-Emile Hojbjerg through ball.

Jack Grealish scored inside the first minute and Erling Haaland netted his 11th Premier League goal of the season as Manchester City eased to a 3-0 victory over 10-man Wolverhampton Wanderers at the Molineux.

Phil Foden added a third in the second half.

The home side was reduced to 10 men on 33 minutes after a horrendous challenge from defender Nathan Collins, who launched himself studs-first into the midriff of Grealish and could have no complaints about the straight red card.

The opening goal after 55 seconds was a first of the season for Grealish, who has come under criticism this week for his failure to both score and provide assists since his $114 million move from Aston Villa last year.

“It was nice to get off the mark this season and get the three points at a difficult place to come against a top team,” Grealish said.

“This Wolves team is so underrated and they showed that in the second half, so it is a great result for us.

“I should be scoring goals and getting more assists. I’m always going to have people talking about me with the amount I was bought for.

“But even at Aston Villa I did not score as much as I should have. It is something I want to add to my game.”

“He played really good, was strong, and made a good run for his goal,” Guardiola said.

“He’s a guy that does not lose the ball. It was a good performance from him.”

The champions took the lead when Kevin De Bruyne’s inviting cross into the six-yard box was turned home by Grealish, before Haaland scored his 14th goal in all competitions with a scuffed shot from the edge of the box after Wolves defender Max Kilman stood off him.

The Norwegian striker became the first player in Premier League history to net in his first four away games.

Striker Alexander Isak equalised from the penalty spot to earn Newcastle United a 1-1 draw against Bournemouth at St James’s Park.

Newcastle hit the woodwork twice and saw Neto pull off a string of fine saves as Bournemouth deployed a fiveman line across the back.

But things went from bad to worse for the hosts as Philip Billing scored for Bournemouth, guiding home a deft volley with his left foot to briefly silence the local crowd.