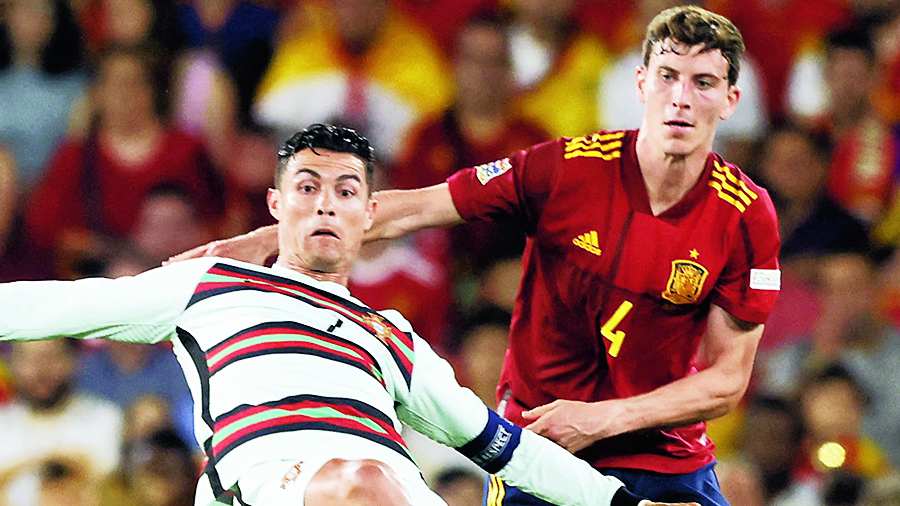 Portugal striker Ricardo Horta grabbed a late equaliser to earn his side a 1-1 draw with Spain in their Nations League opener at Estadio Benito Villamarin on Thursday.

Alvaro Morata had given Spain the lead but Horta's goal ensured the great rivals drew for the fourth time in a row. Portugal have not won a competitive game against Spain since 2004 and have never beaten them on Spanish soil.

Spain made a lively start in the League A Group Two match.

Morata put Spain ahead from close range following a fine passing movement involving midfielders Gavi and Pablo Sarabia in the 25th minute. The 29-year-old, hoping to play his first World Cup this year, is now three goals away from Raul's national squad record of 61 across all age categories.

Portugal had opportunities to equalise through forward Rafael Leao and striker Andre Silva before half-time but both narrowly missed the target.

Substitute Horta equalised for Portugal eight minutes from time, leaving the Spanish defence behind as he latched on to a precise cross from defender Joao Cancelo inside the area and placed a shot into the middle of Unai Simon’s goal.

Portugal manager Fernando Santos defended his decision to drop Cristiano Ronaldo from the starting line-up, saying he was confident that the forward could make a greater impact off the bench. Ronaldo came on in the 62nd minute but failed to find the net.

“Cristiano Ronaldo? They often ask why he is a starter. It’s the million-dollar question,” Santos said. “It was a technical and tactical option for this game. It seemed to us the best solution. For the way we wanted to play and approach the game,” he said.

In Belgrade, striker Erling Haaland’s superb first-half volley gave Norway a surprising 1-0 win away to Serbia. Sweden were also off to a winning start as Emil Forsberg’s first-half penalty and a superb solo goal by Dejan Kulusevski gave them a 2-0 win over Slovenia in Ljubljana.

In Prague, an early Jan Kuchta strike and a second-half own goal gave the Czech Republic a 2-1 win over Switzerland.