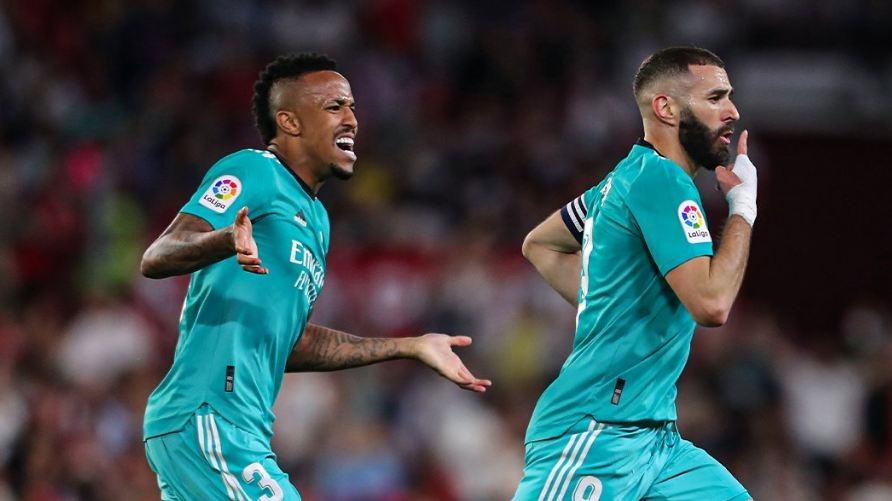 Everyone is waiting for Real Madrid to stumble, but Real Madrid don’t stumble because we have heart and character: Carlo Ancelotti
Twitter
Angshuman Roy   |   Calcutta   |   Published 19.04.22, 12:45 AM

A minute after Karim Benzema — who else? — smashed Real Madrid’s third goal into the Sevilla net, the camera focused on Julen Lopetegui. The Sevilla coach was slumped in his seat in the dug-out, defeated, his face saying it all.

Images do not lie. The Spaniard, who once had a forgettable stint at the Bernabeu, looked beyond devastated. The names Mauricio Pochettino and Thomas Tuchel immediately sprang to mind. They too had felt helpless in front of Real Madrid’s indomitable spirit.

On Sunday, in Seville, the hosts, needing a victory to peg back La Liga’s runaway leaders, were leading 2-0 inside the first 25 minutes with goals from Ivan Rakitic in the 21st minute and Eric Lamela four minutes later.

It was very unlikely that Sevilla players walked back into the tunnel at half-time thinking the game is in their pocket. After all, it was Real Madrid who have made dramatic comebacks this season just when you thought they were down and out. Against Paris Saint-Germain in March, versus Chelsea in April.

A familiar scene was enacted in the next 45 minutes. Rodrygo Goes, coming in place of Eduardo Camavinga, made it 1-1 in the 50th, Nacho — much ridiculed after Ousmane Dembele ran him ragged in the Clasico last month, buried in the second, and two minutes into injury-time Benzema got his 25th of the season.

One saw it coming. Vinicius Junior, too. Even before Benzema’s grounder beat a jungle of Sevilla legs, the Brazilian had started his run towards the stands, confident that his senior partner-in-crime would hit bullseye.

The Sevilla fans watched in silence, it was the first time that they had lost at home this season, as the Madrid bench broke into unbridled euphoria. The world was witness to another comeback story of Real Madrid. It’s the sixth time they have done this in 2021-22.

Coach Carlo Ancelotti said: “Everyone is waiting for Real Madrid to stumble, but Real Madrid don’t stumble because we have heart and character. This team doesn’t surprise me but what happened in the second half leaves me very proud.”

Some would suggest that the 4-0 drubbing in the hands of Barcelona in March is increasingly looking like an aberration. A bad day on the field without Benzema. Goalkeeper Thibaut Courtois says “it’s a fluke”.

There is an argument that Real Madrid are living dangerously and may run out of comeback ideas as the season has entered its business end. Even their biggest fans think they have been distinctly lucky. What if Lionel Messi had not flunked that penalty in Paris in the first-leg of the Champions League? What if Chelsea keeper Edouard Mendy had not made a mess of a simple pass which allowed Benzema to score a hat-trick at Stamford Bridge? Imagine Antonio Rudiger not losing his footing just before Benzema planted his header into the Chelsea net at the Bernabeu which took Real to the semi-finals. But then these are just what-ifs.

Manchester City host the 13-time winners in the Champions League semi-final on April 26 and the return-leg at the Bernabeu is slated for May 4. City had won the last duel in the pandemic year 4-3 on aggregate.

Yes, it will not be easy to make repeated comebacks. But for teams with character it’s never over till it’s over.