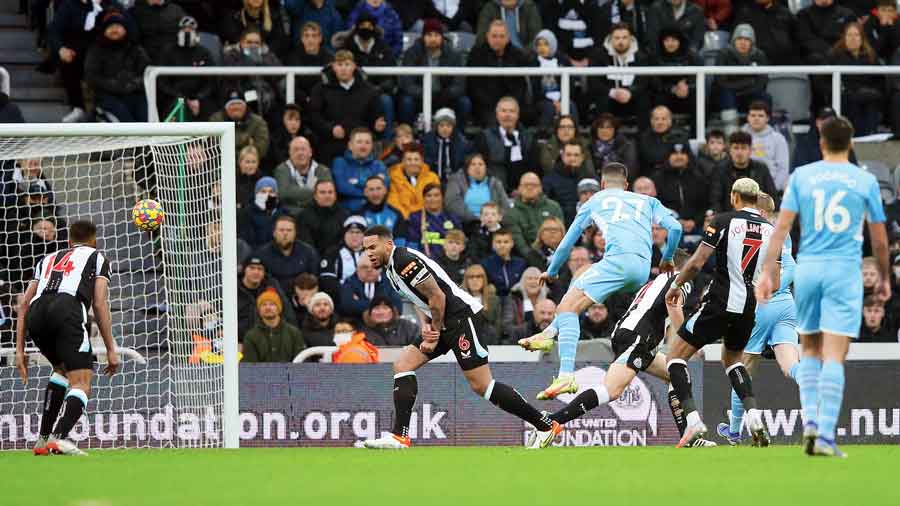 Joao Cancelo scored one goal and made another as Manchester City overwhelmed struggling Newcastle United 4-0 on Sunday to ensure they will spend Christmas Day top of the Premier League table.

The visitors were gifted the opening goal in the fifth minute as Cancelo acrobatically crossed for Ruben Dias to head into an empty net after a mix-up between goalkeeper Martin Dubravka and defender Ciaran Clarke.

Cancelo added a second in the 27th minute, capping off a slashing solo run with a stunning strike, and Riyad Mahrez and Raheem Sterling struck in the second half to complete the rout.

City top of the standings on 44 points while Newcastle are second-bottom on 10 points.

Chelsea’s title ambitions suffered a further blow after they were held to a goalless draw by Wolverhampton Wanderers at a misty Molineux Stadium, a match the visitors had asked the Premier League to postpone before kick-off.

Chelsea created few chances and rarely troubled Wolves goalkeeper Jose Sa. The home side came closest to breaking the deadlock when Daniel Podence had the ball in the back of the net, but the effort was correctly ruled out after striker Raul Jimenez had strayed offside in the build-up. Chelsea, who had only six players on the bench including two goalkeepers after seven Covid-19 infections depleted their squad, had asked the Premier League to postpone the game.

Manager Thomas Tuchel said Chelsea were “angry” at the decision to play.

Brazilian forward Gabriel Martinelli’s double helped Arsenal ease to a dominant 4-1 win at Leeds United on Saturday. In the only league game to go ahead on Saturday due to a huge rise in Covid-19 cases among players, Arsenal blew beleaguered Leeds away with a blistering first-half display.

Having shipped seven goals at Manchester City in midweek, Leeds were repeatedly carved apart in the opening period, with Martinelli’s brace putting Arsenal 2-0 up inside 28 minutes.

Frustrations were palpable all round Elland Road as Bukayo Saka added a third for Arsenal three minutes before the break, with the scoreline not at all flattering for the dominant London side.

Leeds did threaten a late comeback when Rafinha converted a penalty 15 minutes from time, but substitute Emile Smith Rowe’s late goal put the game beyond the hosts.

Arsenal’s third league success in a row consolidated fourth spot in the standings, while Leeds’ second successive hammering left them down in 16th, five clear of the drop zone, but having played three more games than Burnley in 18th.

“I am very happy with the performance, the week that we had, and the way we are moving forward,” Arsenal coach Mikel Arteta said. “It is always difficult to play against Leeds. They didn’t give up on the second half. I am pleased, it is not easy to play the way we did in this atmosphere. We made a real statement.”

Police made one arrest after Arsenal reported a fan for alleged racial abuse directed at their substitutes’ bench. Leeds confirmed the arrest, saying the incident occurred in the first half of the match at Elland Road.

“Racism will not be tolerated at Leeds United and any supporter found to be using racist language will be subject to a life time ban for all Leeds United games,” the club said in a statement.

Arsenal substitute Rob Holding was pictured talking to the fourth official just after the half hour mark, before a member of Leeds staff was notified.

Liverpool midfielder Thiago Alcantara missed the match at Tottenham Hotspur due to a “suspected positive test for Covid-19”, while Jordan Henderson is out because of illness, the Merseyside club said.

Captain Henderson returned a negative test for Covid-19 and Thiago is under isolation.