The result leaves Chelsea top of the table, a point ahead of Manchester City and two clear of Liverpool 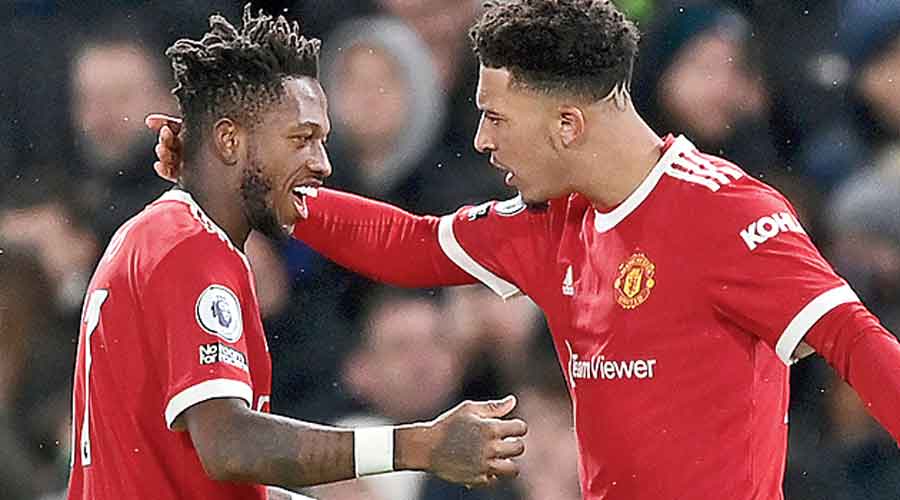 Manchester United put their worries to one side to hold Premier League leaders Chelsea to a 1-1 draw at Stamford Bridge on Sunday, thanks to a Jadon Sancho breakaway goal that was cancelled out by a Jorginho penalty.

Chelsea, seeking to maintain their lead at the top of the table over Manchester City and Liverpool, dominated the first half against a United side playing their first Premier League match under caretaker manager Michael Carrick after Ole Gunnar Solskjaer’s sacking last weekend.

The Blues were punished for failing to turn possession into goals five minutes after the restart when United cleared and Jorginho, alone near the half-way line, miscontrolled and Sancho raced past him to beat the helpless Edouard Mendy.

Chelsea were rocked by the goal against the run of play but Jorginho repaid his debt to the Stamford Bridge faithful in the 69th minute when he coolly converted a penalty after Aaron Wan-Bissaka fouled Thiago Silva.

The hosts pushed for a winner and brought on Romelu Lukaku, returning from injury as a substitute for the last 10 minutes, but they failed to find a way through United's defence.

The result leaves Chelsea top of the table, a point ahead of Manchester City and two clear of Liverpool. United sit in eighth place, 12 points behind Chelsea.

Manchester City captain Ilkay Gundogan struck in the midst of a first-half snowstorm before a late goal from substitute Fernandinho proved enough to secure a 2-1 home victory over West Ham United.

West Ham, who snatched an added-time consolation with a superb Manuel Lanzini strike, stay fourth on 23 points. With thick snow falling for most of the opening half, City’s Riyadh Mahrez had the ball in the net in the 16th minute after a superb finish but his effort was ruled out for offside.

City took the lead in the 33rd minute when Mahrez drove the ball across the goal and Gundogan was on hand to steer it home. That marked the beginning of a spell of heavy pressure from the hosts and they could have gone 2-0 up four minutes later but Gabriel Jesus’s shot was cleared off the line by Ben Johnson.

It took the home side until the 90th minute to score again, however, as Jesus teed up fellow Brazilian Fernandinho to net three minutes after he came off the bench.

Leicester City beat Watford 4-2 amid heavy snowfall which reduced visibility and made playing conditions difficult at the King Power Stadium.

The match began in relatively clear conditions and Leicester took an early lead from a Watford error when William Troost-Ekong ducked under a long ball, allowing Leicester’s James Maddison to sneak in behind and beat keeper Daniel Bachmann.

Watford levelled 14 minutes later after Emmanuel Dennis was tripped in the box by Wilfred Ndidi and Joshua King made no mistake in beating Kasper Schmeichel from the spot. But as the snowfall got heavier, Jamie Vardy fired the home side ahead with two goals in eight minutes.

The match between Burnley and Tottenham Hotspur at Turf Moor was called off less than an hour before kick-off due to heavy snowfall on Sunday. “Due to concerns with the playing surface and surrounding areas, it’s been deemed that the game can’t go ahead safely,” Burnley said on twitter.

Groundstaff were working to clear the snowfall from the field when the announcement was made after consultation between the referee and the two managers. “The referee explained the safety angle as well so it was important to make a decision early,” said Burnley manager Sean Dyche.

“It fell that quick and that heavy. It’s still quite strong now. (The pitch) can’t get rid of the snow that quick. It’s the lines being cleared as well — we would have to stop and clear them. It’s a joint decision with everyone concerned.”