Dutch are happy to take a back seat 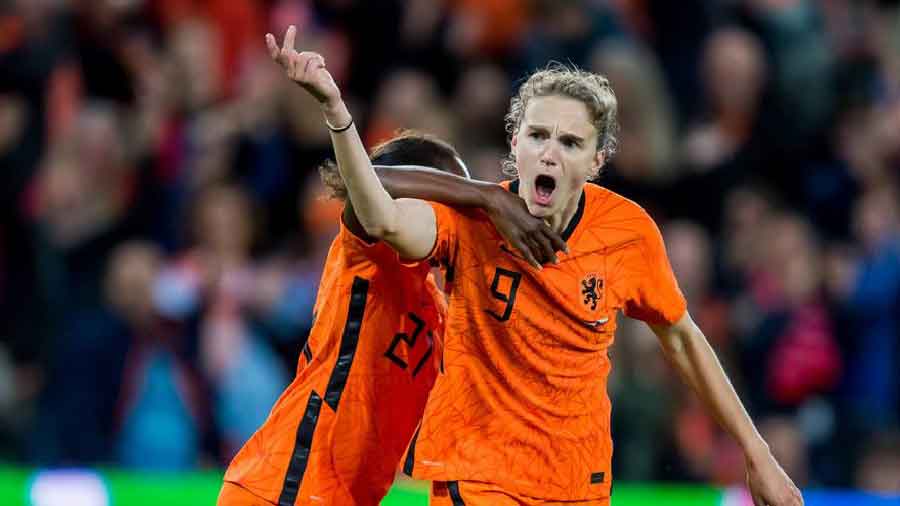 Home advantage spurred the Netherlands onto victory at the last Women's Euro in 2017. Now they’re happy to take a back seat as they look to defend their crown in England this summer.

As Vivianne Miedema turned her Danish defender inside-out and slammed home a late goal in the Women's Euro 2017 final, an unlikely champion was born.

The Dutch surprised many at the tournament, as a budding team spirit slowly bloomed throughout to put them on an orange wave towards lifting their first major trophy.

"We just had that confidence,” Miedema tells DW. "Going into the final, it just felt right, and we felt like we couldn't lose that day.”

That confidence remains, even if expectations are a little more reserved heading into this summer's Euros.

The Netherlands were humbled 5-1 in a friendly against England last month and losing mastermind coach Sarina Wiegman to the tournament hosts cannot be underestimated.

"England are the favorite, if you look at the depth of their squad, it's unreal,” Miedema says. "They've got great players in every single position.

"Spain has to be up there as well, then I think France and Germany. Even us, I think we're great outsiders and hopefully we can compete.”

Despite the attempt to downplay the Netherlands as a favorite, Miedema's rivals won't be underestimating her side's ability.

The Dutch were runners-up in the 2019 World Cup, losing to the US - albeit with Wiegman on the sidelines - and still boast a talented squad.

Fan darling Lieke Martens adds frightening pace to the attack, alongside Miedema and Roord, while a settled midfield consisting of Sherida Spitse, Danielle van de Donk and Jackie Groenen have an excellent understanding.

New coach Mark Parsons has them playing an even more attacking game than was present under Wiegman, and the heavy loss to England was not as emphatic as the scoreline suggested.

Still, Miedema prefers to remain in the shadows.

"As a team we know where we are,” Miedema admits. "We've got a new coach and after the Olympics we've got a lot of young girls coming to the Euros.

"So I don't think it's realistic for us to go and say we're going down to defend our title.”

The Netherlands will have extra help in their quest, with an orange-clad army supporting them at every game. Dutch fans have bought the most tickets behind hosts England and are known for their spirited support.

For Jill Roord, who was part of the squad in 2017, the fans were a huge advantage on the road to glory.

"The atmosphere was amazing, so many fans, orange everywhere,” she tells DW.

"It was unbelievable for us, because before that we never really had massive crowds. We didn't expect that atmosphere, it was dream.”

Having that support in an away tournament will certainly come in handy and Roord had a cheeky warning for the hosts about the weight of expectation.

"England are one of the favorites, they have a really good team and the home crowd. But it also brings pressure. We dealt with that really well and now it's up to them to deal with that,” she says with a grin.

The Dutch are certainly hungry to defend their title, even if they're cautiously downplaying their chances.

A team with such humble confidence, team spirit and talent will secretly be harboring strong beliefs that they can beat anyone on their day. Not to mention that in Miedema they boast one of the world's dealiest finishers.

"I'd love to be able to say I've won the Euros twice, so definitely still hungry,” Miedema says.

"Everything needs to be right for us, for us to be able to challenge. But if we can connect as a team I think we can have a really nice summer. I hope we can turn up and enjoy our time.”

No matter how far they progress, the Dutch will most definitely enjoy themselves, both in the stands and on the pitch. And with their exciting brand of attacking football, they'll likely wow a few neutrals along the way as well.