As an eight-year-old, Jamyang Chotso hid in caves as she left her parents to flee Tibet. Now she captains the country 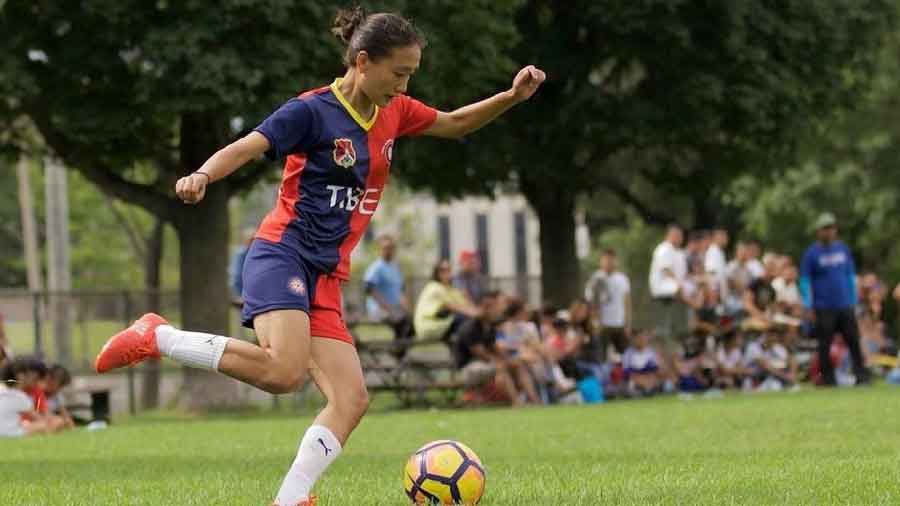 As an eight-year-old, Jamyang Chotso hid in caves and walked through the night as she left her parents behind to flee Tibet. Now she'll captain her country in a World Cup that is about more than sport.

The first time Jamyang Chotso kicked a football was when she was 12.

This was in a settlement for Tibetan refugees in Dharamshala, a hillside city in Northern India that is home to the Dalai Lama and the Tibetan government-in-exile.

"I had no boots," says Chotso, reflecting on her early experiences of football. "We played on a dusty school ground."

Now, at 25, Chotso is a central defender and captain of FC Tibet, the host team for the inaugural CONIFA World Cup for women, which features teams not recognized by global football's governing body, FIFA. Her journey from refugee to leader is a powerful story that echoes the profound struggles of so many Tibetans.

Since 1950, Tibet has been ruled by China. Many Tibetans have fled to other countries for a better life. With the help of a guide, Chotso escaped at the age of eight.

"I was too young to understand what was happening at the time," she tells DW, describing the night she left her family. "I didn't know why my parents decided to send me to India."

It was a dangerous trek to Nepal. "What I remember is that we walked during the night-time and we had to hide in caves because walking in the daytime was too risky." Chotso recollects travelling in the back of a car before arriving at a refugee camp, where she knew she was safe. "After that, we were sent to India to study."

Chotso, now a full-time nurse in Delhi, has grown to understand her parents' decision to send her and her siblings to India. "In Tibet, we hardly get to learn our language, history and reality of the world. Tibetans are brutally punished and jailed for asking for basic human rights such as speaking our own language. In India, we have our own Tibetan schools. We can learn and preserve our own language."

She has never been back to Tibet. "We never know what the Chinese government will do with us," she says, reflecting on the fact that she will never meet her parents again. "Due to strict government issues, we are not allowed to visit our parents and they cannot come here.”

Chotso was educated at a Tibetan children's village school with other refugees. She took pleasure and escape in sport, even though her footballing opportunities were limited. "There was no major tournament to participate in and women's football was not part of the culture of my community."

Chotso credits the dedication of her coach, an American called Cassie, for pushing her as an athlete and a footballer. Twelve years after kicking her first ball, Chotso is the captain of FC Tibet and this is a source of immense personal pride. "Even though we live in India, we must never forget our roots.”

Her current coach shares both that pride and heritage. Gompo Dorjee, 43, works for the Tibetan National Sports Association as coach of FC Tibet. He lives in Clement Town, India, but his parents came from Dege in Tibet. He too feels the "political, cultural and emotional" power of the upcoming tournament.

Founded in 2013, CONIFA, the Confederation of Independent Football Associations, is the governing body for all associations outside FIFA, in their words: "de-facto nations, minority people and sports-isolated territories."

Unlike FIFA, CONIFA is relatively unknown, even though it has over 50 members and represents over 700 million people from around the world. It prides itself on being a politically neutral organization which aims to "build bridges” between people through "friendship, culture and the joy of playing football."

For Chotso, the tournament, which runs from July 1 to 6, is about much more than lifting a trophy. Like so many elements of Tibetan culture, football has been pushed into exile. However, recent participation in a number of CONIFA tournaments marks Tibet's gradual and complicated rebirth as a footballing nation. "Football is a way of connecting with people around the world", she says, and she hopes the tournament will act as a "showcase to Tibetan ethics and culture”.

Chotso also sees the World Cup as a major breakthrough for women's sport in Tibet. She hopes to inspire other young footballers.

Dorjee says many of his players have similar stories to Chotso and praises their passion and sacrifice, with many players doubling up as students and nurses. For him, the tournament will "prove to the world that we belong to Tibet".

He adds that Tibetan women did not play football in "the old days" and that the World Cup will play a "huge role in the cultural life of Tibet by empowering Tibetan women."

The Tibetan National Sports Association (TNSA), a long-time member of CONIFA, submitted their proposal for hosting the World Cup as part of its plans to focus their attention and resources on the women's team, a further sign of changing attitudes.

The tournament is taking place in Paonta Sahib, India, an industrial town on the banks of the Yamuna River. The TNSA has been developing a sporting stadium within a Tibetan settlement and their objective is clear: "to energize the youth of Tibet through a natural vehicle and to make a difference in our just struggle for our identity and culture."

Chotso is the perfect example of this energized youth. Win or lose, football is her platform to speak out on behalf of Tibet, as well as reconnecting with the country she fled as a child.