The Germans are with their backs to the wall in their last match, needing a win to have any chance of progressing to the knockout stage 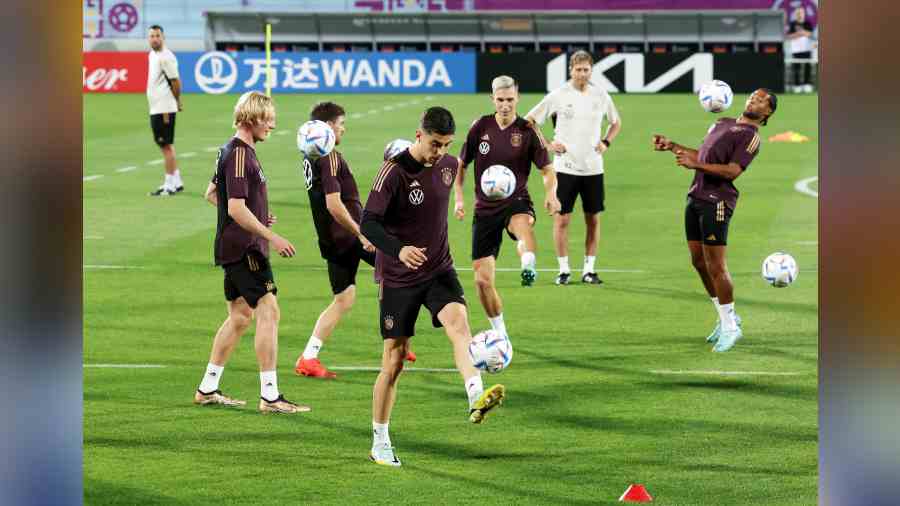 Germany will be happy with just a win against Costa Rica on Thursday, coach Hansi Flick said on Wednesday, adding that he has no plans to step down if the four-time world champions crash out of the World Cup early for the second straight tournament.

Flick, who took over last year after Joachim Loew’s 15 years at the helm, has seen his team lose their Group E opener to Japan before snatching a 1-1 draw with Spain thanks to forward Niclas Fuellkrug’s late equaliser to stay alive.

The Germans were eliminated in the first round at the 2018 World Cup, at that time their earliest exit in over 80 years.

“I can confirm it (I will be staying on) from my side but I have a contract until 2024 and I look forward to the home Euros (in 2024) but it is a long time until then,” he told a news conference. Germany will host the Euro 2024 tournament.

The Germans are with their backs to the wall in their last match against Costa Rica, needing a win to have any chance of progressing to the knockout stage.

Victory over Costa Rica, who lost 7-0 in their opener to Spain, coupled with a win for Spain against Japan, would see them through along with the Spaniards.

Costa Rica have had only one shot on target in their two matches so far but it was enough to score the winner against Japan.

“We want to kill off the game early so as to pile pressure on the other group game,” he said. “They (Costa Rica) will be defensive most likely. We need to do it and we have to have the attitude we showed against Spain.”

Scoring more goals against Costa Rica than Spain is not an option for Flick.

“I think it would show a lack of respect to Costa Rica to talk about scoring eight goals,” he said. “We will be happy if we win it and that is our aim. But to come back from that 7-0 and deliver such a defensive performance against Japan deserves respect.”

As for Costa Rica, they have got form when it comes to sending illustrious nations home from World Cups.

Coach Luis Fernando Suarez says it might be something in the Los Ticos genes.

The Central Americans were given no chance when they were drawn with Italy and England eight years ago in Brazil but ended up topping the group as the two heavyweights went home.

Costa Rica reached the quarter-finals that year, losing to the Netherlands on penalties.

“Eight years have gone by and players have changed but you have good memories,” 62-year-old Colombian Suarez, who took charge last year, told reporters on Wednesday.

“Maybe it’s down to the genes of the Costa Ricans. When they reach a World Cup they do things differently and they play well.”

“They are never the favourites, which is good.”

The equation for Flick's boys

All four sides can qualify from Group E. Here are what each team needs to do to progress to the Round of 16

■ Spain: On four points, Luis Enrique’s side will qualify with a win or a draw against Japan. A loss will leave them relying on their currently superior goal difference (+7) to progress. But if they lose and Costa Rica beat Germany, the Spanish march will end.

■ Japan:  A victory against Spain will do for the Samurai Blue who are on three points. A draw too will suffice if Costa Rica vs Germany has a similar outcome. A loss to Spain, or a draw coupled with Costa Rica beating Germany would knock them out. A draw and a German win will bring goal difference into reckoning. Japan have a GD of 0 so they need to score against Spain.

■ Costa Rica: After their surprise win over Japan, the central American nation can advance by defeating Germany. A draw for Luis Fernando Suarez’s side would also guarantee a spot in the next phase if Spain beat Japan. But if Spain are beaten, then goal difference comes into play. Costa Rica have a poor GD of –6 so a draw in both games or a defeat to Germany eliminates them.

■ Germany: Hansi Flick’s men must pick up three points. They qualify if they beat Costa Rica and Spain trumps Japan. A draw between Spain and Japan, or a win for the Asian nation, would take the equation to goal difference. Germany have a GD of –1. All other results would see them bow out.