Mohamed Salah, who was targeted by lasers, missed a vital shoot-out penalty as his Egypt side failed to qualify for the Qatar extravaganza 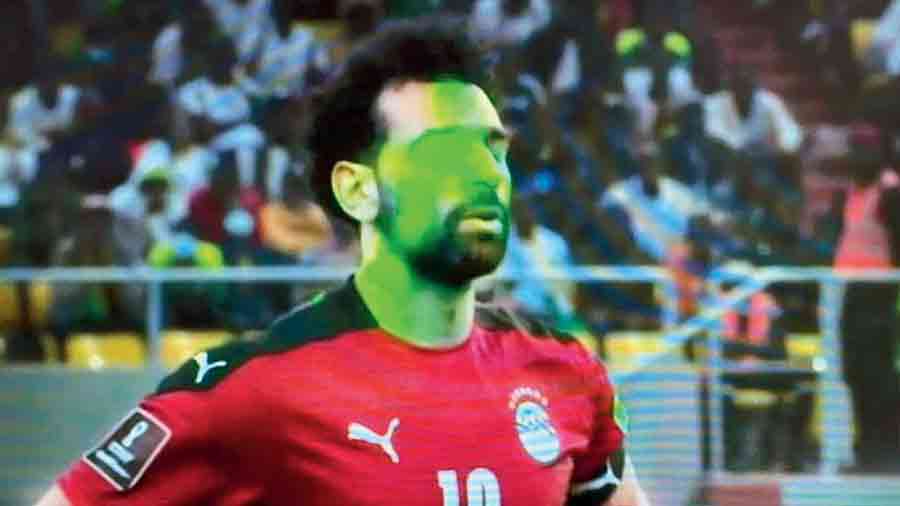 Lasers smudge Mohamed Salah’s face during the World Cup qualifying match against Senegal in Dakar.
Twitter
The Telegraph   |   Published 31.03.22, 02:03 AM

The final night of African qualifying for the World Cup produced high drama and upsets on Tuesday with Liverpool’s Mohamed Salah, who was targeted by lasers, missing a vital shoot-out penalty as his Egypt side failed to qualify for the Qatar extravaganza.

Instead, Senegal booked a berth with Salah’s club team-mate Sadio Mané scoring his spot kick to take his side through.

The continent's line-up in Qatar will have a familiar look about it. Morocco, Senegal and Tunisia participated at the last finals in Russia in 2018, while Cameroon and Ghana were at the finals four years before that.

Both Cameroon and Ghana produced unexpected away success to qualify, eliminating the more fancied Algeria and Nigeria.

Senegal’s victory was like a repeat of the African Cup of Nations final last month when Mane clinched a first major title for his country by also scoring the winning penalty in a shootout against the Egyptians.

In Dakar, Senegal trailed Egypt 1-0 from the first leg but equalised after only four minutes thanks to Boulaye Dia. The visitors held firm for the rest of the game, despite many players being targeted by lasers for much of it — and, according to the Egyptian FA, bottles, stones racist abuse — to force a shoot-out, which the hosts won 3-1.

Senegal players also had lasers shone at them in the first leg in Cairo last week.

Salah didn’t get a chance to take a penalty in the African Cup final shootout as it was decided before it got to him. Going first went no better for him this time and Egypt missed three of their four penalties.

Salah blazed his over the crossbar, though it appeared that he had a laser shone in his eyes in the build-up to taking it. Senegal also missed their first two but Ismaila Sarr and Bamba Dieng scored, giving Mane the chance to seal a place at Qatar with Senegal’s fifth penalty. He looked at the referee, gave him a thumbs-up and then smashed it down the middle in front of around 50,000 fans.

Cameroon secured their place with the last kick of the match against Algeria, deep into extra time in Blida.

It left Algeria, who were African champions in 2019 and had breezed through the earlier stages of the World Cup preliminaries, crestfallen.

“We were only 10 seconds away from the World Cup. We collapsed,” Algeria coach Djamel Belmadi said after the 2-1 home loss.

Ghana profited from a goalkeeping error to also advance on the away goals rule, their 1-1 draw in Nigeria setting off rioting by home fans in Abuja.

The Fifa doping control officer, Zambian doctor Joseph Kabungo, collapsed and died afterwards from a suspected heart attack, match officials said on Wednesday. They denied reports he had been attacked in the melee.