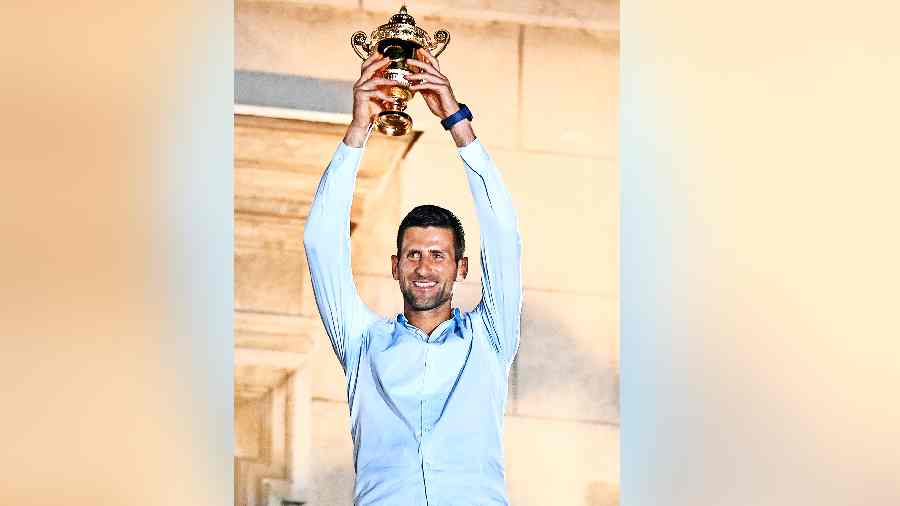 Novak Djokovic with the Wimbledon trophy during a ceremony organised to welcome him in Belgrade on Monday.
Twitter
Reuters   |   Belgrade   |   Published 13.07.22, 03:54 AM

Novak Djokovic is hoping to be allowed to play at the Australian Open next year, despite being kicked out of the country over his vaccination status in January, the Serbian told state television RTS on Monday.

Djokovic won the Australian Open, French Open and Wimbledon titles in 2021 but was unable to defend his Melbourne Park crown owing to his refusal to be vaccinated against Covid-19.

He lost his French Open title after going out to eventual champion Rafael Nadal in the quarter-finals this year but retained his Wimbledon crown on Sunday.

The 21-time major champion cannot currently enter the US without being vaccinated against Covid-19 while his deportation from Australia carried with it a threeyear re-entry ban. “As things stand now, I cannot travel to Australia and the US, but I am hoping to get positive news,” Djokovic told RTS after being greeted by thousands of fans in front of Belgrade City Hall.

“I believe things will change for the Australian Open. For the US Open there is not much time, but hope dies last. I would like to play at the US Open and Australia Open, but even if I do not it’s not the end of the world.”

Australia scrapped a rule that required international travellers to declare their Covid vaccination status last week. Then Prime Minister Scott Morrison had said when Djokovic was removed from Australia in January that his re-entry ban could be waived “in the right circumstances”.

After finishing 2021 one major short of a rare calendar-year Grand Slam, Djokovic’s season has not panned out as he would have envisaged after missing the Australian Open and losing to Nadal at Roland Garros.

The Serb displayed his legendary warrior mentality during Wimbledon, becoming the first player in the Open Era to win the grass-court grand slam after losing the first set in the quarter-final, semi-final and final.

On Monday, thousands of people waved Serbian flags and shouted “Nole! Nole!” — Djokovic’s nickname in Serbian. Djokovic addressed fans from the balcony of City Hall and threw 20 signed tennis balls into the crowd.

Golf not on Barty’s mind

Former world No.1 Ash Barty has no regrets about retiring from tennis in March, aged 25, and also does not plan to start playing golf professionally, ending speculation that she would now focus her career on that sport.

Barty sent shockwaves around the tennis world when she unexpectedly announced her retirement at the peak of her game just two months after claiming a third Grand Slam title at the Australian Open.

She had added fuel to the speculation that she would become a professional golfer in April by signing up for a series of exhibition tournaments.

“Golf is a hobby and it always will be. I know what it takes to get to the very top of any sport, and I don’t have the desire or want to do the work required,” she added.