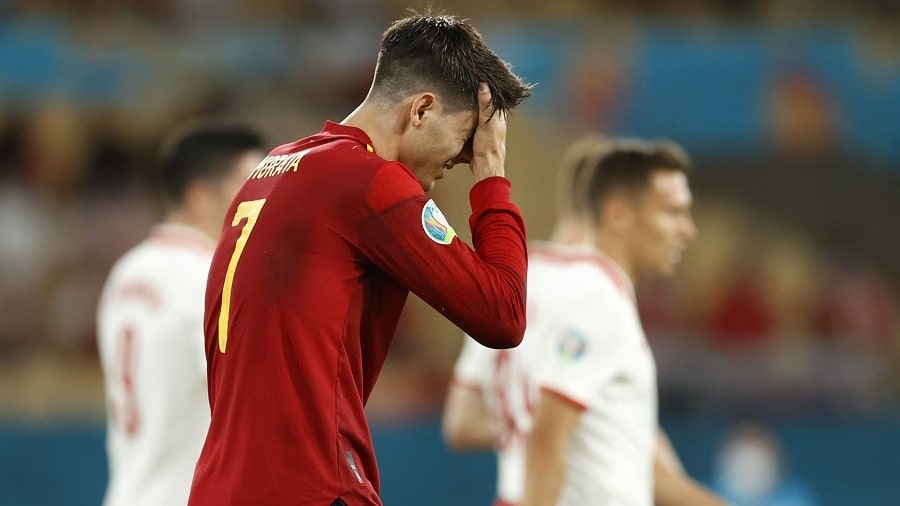 Spain have advanced to the European Championship semifinals as the highest-scoring team in the tournament. Don't be fooled, though.

The biggest flaw in Spain's quest for a third continental title in the last four editions lies in its shortcomings up front.

Just take the win over Switzerland in the Euro 2020 quarterfinals on Friday, for example. The Spanish had 28 shots in a match that went to extra time and penalties and in which the Swiss played about 45 minutes with 10 men. By the end, it resembled shooting practice against overworked Switzerland goalkeeper Yann Sommer.

Still, Spain finished the 120 minutes having had to rely on an own-goal in a 1-1 draw, and even missed two of their penalties in an error-riddled shootout that the team won 3-1. The problem for Spain coach Luis Enrique is he has nowhere to turn.

First-choice striker Alvaro Morata has the complete backing of Luis Enrique, yet not for the first time in his career looks like a player lacking confidence, having encountered abuse on social media after spurning many big chances in the group stage.

Gerard Moreno is the other striker in Spain's Euro 2020 squad, and replaced a tired-looking Morata after only 54 minutes against Switzerland. The Villarreal player, who scored 30 goals last season in Spain, was presented with at least four clear chances to score one coming from inside the six-yard box but squandered each one.

Of Spain's tournament-leading 12 goals so far, Moreno has none and Morata has two.

"It's pretty clear what Morata and Gerard have been through here," Luis Enrique said.

Spain have squeezed their way through to the semifinals in an unconventional way, drawing their opening two games scoring only one of their 29 shots on goal against Sweden and Poland, then finally finding the cutting edge in a 5-0 victory in the must-win game against Slovakia.

Then came that wild 5-3 win over Croatia in the round of 16 that appeared to be a turning point for Spain's attack.

One thing that will satisfy Luis Enrique is that Spain have had six different scorers at Euro 2020. The midfield is performing, with a tournament-high possession count of 67.2% and the best passing accuracy of all teams at 89.4%.

According to UEFA's statistics, Spain have had 365 attacks at the tournament, 69 more than second-place Italy. Only three teams have more than 200. That's all well and good if there are strikers there to finish them off. But that is not the case as Spain heads into a semifinal match against a defensive behemoth in Italy.