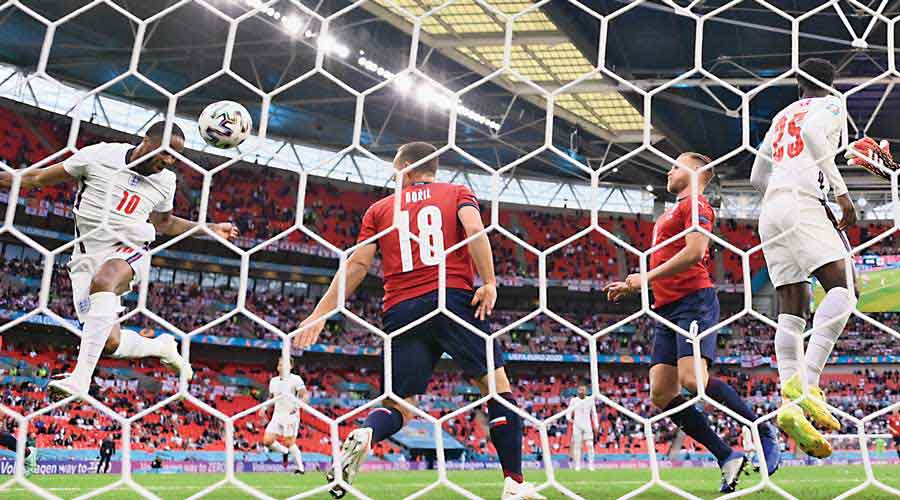 Raheem Sterling scores for England during the match against Czech Republic at London’s Wembley Stadium on Tuesday. In the other Group D match at Hampden Park, Glasgow, Nikola Vlasic gave Croatia the lead over Scotland before Callum McGregor equalised in the 42nd minute.
Getty Images
Our Bureau And Agencies   |   Published 23.06.21, 03:56 AM

England found an attacking spark to beat the Czech Republic 1-0 at Wembley on Tuesday and clinch top spot in Group D at Euro 2020.

After a turbulent few days following the 0-0 draw with Scotland and having lost Mason Mount and Ben Chilwell to Covid isolation, Gareth Southgate got just what he was looking for as Raheem Sterling’s goal secured the top spot.

Patrik Schick, the leader in the Euro 2020 Golden Boot standings, wasn't able to make a difference in this game. He's out and in comes Tomas Pekhart. Czech boss Silhavy had a long conversation with his super-sub.

A couple of days contemplating why England haven’t already advanced at the European Championship allowed Raheem Sterling to fully assess the team’s shortcomings. How could a stalemate with Scotland have been prevented?

“With the ball we could have shown a bit more personality and dominated the game more with the ball,” the England striker said.

“As a team we need to know where to identify that and take control. We can’t get brought into playing a certain way when we want to use the ball a little better.” Starting had said.

“I do feel there’s a bit of an over-reaction,” Sterling said. “I just feel there's more of a panic on the outside than inside the building. At the same time, the players who have been at a few tournaments, who have huge experience, try to help the other ones.”

England can’t even blame unfamiliar surroundings for being held to a 0-0 draw by Scotland on Friday after beating Croatia 1-0. All of their group games are at Wembley Stadium.

The Euro 2020 scoring chart is topped by an expected name and a less renowned forward. Joining Portugal forward Cristiano Ronaldo with three goals is Patrik Schick ahead of the Czech Republic striker's trip to London.

It was at Wembley that the Czechs came closest to adding to their 1976 European title, losing the Euro 1996 final to Germany. By winning their opening match against Scotland, they have already achieved more than Euro 2016 when they failed to advance from the group stage.