A team from Srinagar played their first match of the season, leaving the pitch with three points 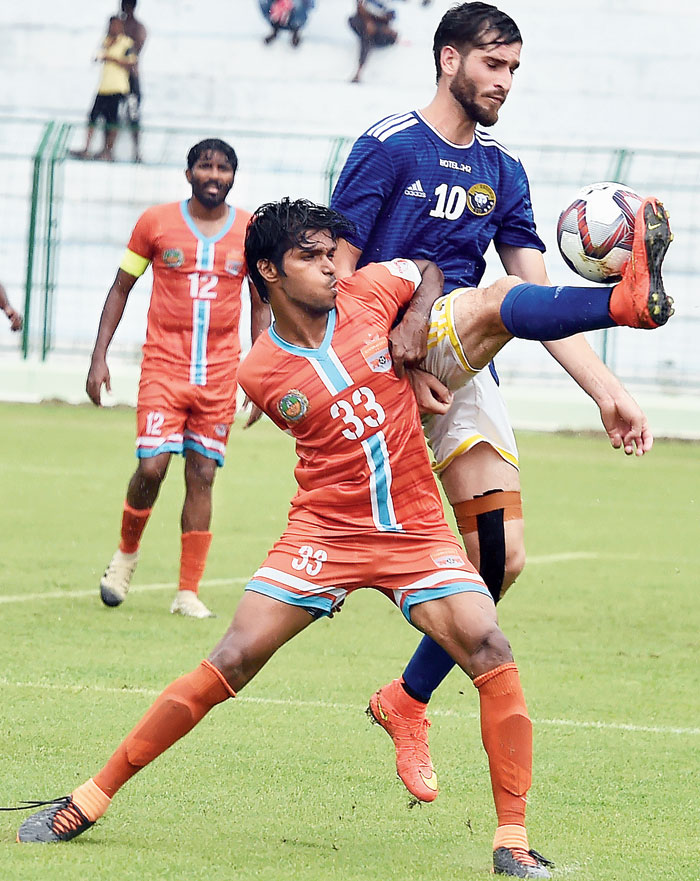 Wednesday was all about Real Kashmir Football Club.

A team from Srinagar coming here for the Durand Cup without any preparation, they had their first practice session on Tuesday, playing their first match of the season and leaving the pitch with three points. Holding their heads high.

Sadly there were hardly any spectators to applaud.

The 1-0 win against 10-man Chennai City FC at the Kalyani Stadium in a Group C match of the Durand Cup said a lot about the team’s mental strength.

It also said a lot about goal-scorer Danish Farooq’s character.

Danish hasn’t been able to contact his family, but while on the field the tension back at home did not affect his performance. A long-ranger from Chennai City’s midfield region did not give substitute goalkeeper Prateek Singh a chance to move.

“Football has taught me to thrive in adversity. When I play football, I forget everything,” Danish said at the post-match media conference.

“Hunger, heart and desire,” said coach David Robertson sitting next to him.

“We are used to with this... big or small” was co-owner Sandeep Chattoo’s take, referring to the lockdown back in Srinagar.

Robertson was talking about the mood in the RKFC camp after they met for the first time in three months on Monday night.

“Players were hugging each other... clapping... team bonding is very important in a situation like this,” he said.

“Players like Danish, Loveday (Okechukwu), showed how strong they are mentally. Loveday jogged for the first time on Tuesday, and on Wednesday he was at the ground playing a full 90-minute match,” the Scot added. “This is what we say showing character.”

Along with Danish, Farhan Ganie, Muhammad Hammad, Khalid Qayoom and goalkeeper Ujawara Nabi Bhat are Kashmiri footballers who are with the RKFC squad. Arun Nagial is from Jammu.

In their three-and-a-half years of existence, RKFC have won many a match. Their first tournament was the Durand Cup 2016.

Robertson was asked if Wednesday’s victory would be the most unforgettable one. “Yes. I think so. From day one of my stint, what I have tried to build amongst the players is the never-say-die attitude. That helps you defy odds. Let me tell you, we are a very difficult team to beat.”

Nobody knows better than Chennai City FC. The I-League champions lost both home and away to RKFC in the last edition and now again they had to bite the dust in the Durand Cup.

Chennai City’s articulate coach Akbar Nawas made the most telling comment on RKFC’s Wednesday showing. “Circumstances sometimes motivate you to do the unthinkable… From war-ravaged Iraq winning the Asian Cup in 2007, to RKFC defying odds today.”

Away from home Real Kashmir will not train in Srinagar for one month. “Situation in Kashmir is such that we do not know when normalcy would return. So we have decided to have our training somewhere else. That will be after the Durand Cup,” Sandeep Chattoo said.

“We have reached out to other clubs and they are interested in allowing us to use their training facilities. We want one-month of solid practice,” Chattoo added.

Chattoo was asked whether TRC Synthetic Turf would remain RKFC’s home ground. “Look, the I-league is not happening in the next three months. So we have time. Let’s see what happens. If required, we may request the All India Football Federation (AIFF) to schedule our away matches first. There is no harm in that,” Chattoo said.