Morten Boesen said the Inter Milan midfielder may not have survived had the game not been played at a major soccer tournament with top-class medical equipment at hand. 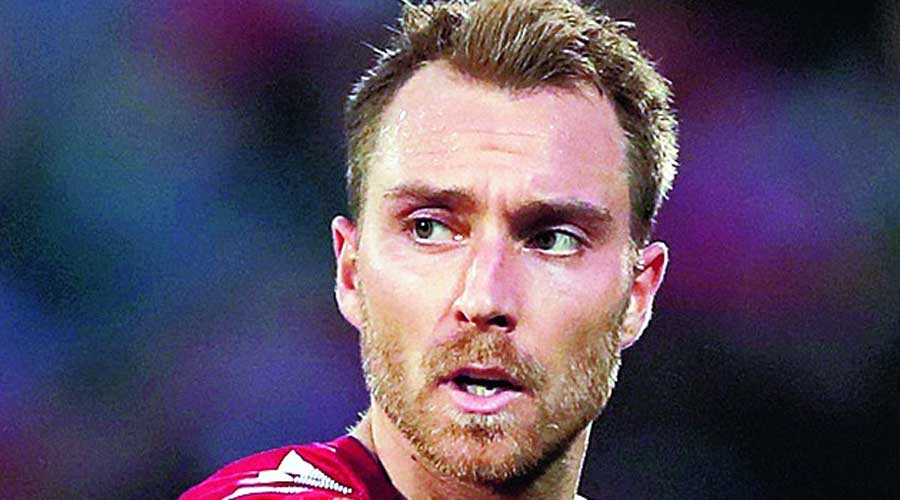 Denmark’s team doctor said on Sunday that Christian Eriksen’s heart stopped and that “he was gone” before being resuscitated with a defibrillator at the European Championship.

Eriksen collapsed during Denmark’s opening Euro 2020 group game against Finland on Saturday and was given lengthy medical treatment before regaining consciousness.

“He was gone. And we did cardiac resuscitation. And it was cardiac arrest," said team doctor Morten Boesen, who led the work in giving Eriksen treatment on the field.

“How close were we? I don't know. We got him back after one defib. That's quite fast,” he added.

Eriksen was in stable condition at a Copenhagen hospital and had spoken to teammates via video link on Sunday, team officials said.

Boesen said it was still unclear what caused the midfielder's collapse.

“I'm not a cardiologist, so the details about why it happened and further, I will leave to the experts,” he said.

He also said the 29-year-old Eriksen may not have survived had the game not been played at a major soccer tournament with top-class medical equipment at hand.

“That was completely decisive, I think,” Boesen said.

“The time from when it happens to when he receives help is the critical factor, and that time was short. That was decisive.”

Denmark coach Kasper Hjulmand said when he spoke to Eriksen, the Inter Milan midfielder was more concerned about his teammates' well-being than his own.

"That's typical Christian. It was good to see him smile," said Hjulmand.

The Danish players and team staff were being given crisis management assistance as they processed the incident. Eriksen fell face-forward to the ground late in the first half and his teammates formed a protective circle around him while the medics gave him treatment.

The game was suspended for about 90 minutes before resuming. Finland won 1-0 after scoring in the second half.

Denmark cancelled a planned training session on Sunday but Hjulmand said they would try to go back to their normal routines on Monday. He insisted the players are determined to finish the tournament, with Denmark playing Belgium next in Group B on Thursday.

“(Eriksen) would like for us to play,” Hjulmand said.

“We are trying to get back to some normality tomorrow. That is completely in line with what the psychologists are saying, and the way I want to try to lead this group forward.”

The decision to restart the game on Saturday has been heavily criticised by many in Denmark, including former players Peter Schmeichel and Michael Laudrup.

UEFA gave Denmark the option to resume the game on Sunday at noon but the players opted to finish it Saturday evening instead. A later date was not possible because Finland play their second group game on Wednesday in St Petersburg, Russia.

Hjulmand said he remained proud of his players for finishing the game, but that he now had second thoughts about not insisting it should have been called off.

“In hindsight, I wonder if I could have done something differently,” Hjulmand said.

“Because when I look back, I honestly do not think we should have been back on the field. I am so proud that the players were able to mobilise and give it a try. It was a huge effort. But I have a guilty conscience that we were back out there.”